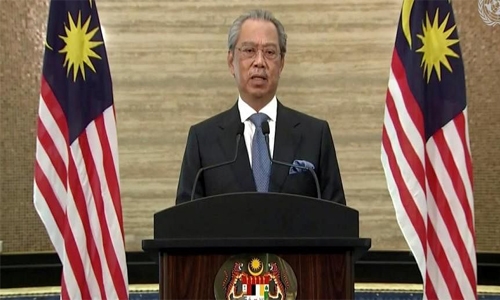 Malaysia’s king is set Tuesday to meet the heads of political parties as he swiftly began the task of finding a new prime minister amid a worsening coronavirus pandemic.

The resignation Monday of Prime Minister Muhyiddin Yassin after less than 18 months in office followed mounting public anger over what was widely perceived as his government’s poor handling of the pandemic. Malaysia has one of the world’s highest infection rates and deaths per capita, with daily cases breaching 20,000 this month despite a seven-month state of emergency and a lockdown since June.

The monarch has ruled out a general election as many parts of the country are COVID-19 red zones and health facilities are inadequate.

Muhyiddin was appointed caretaker prime minister until a successor is found.

Local media said Sultan Abdullah Sultan Ahmad Shah has summoned party leaders to the palace later Tuesday, all believed to be at the same time. This included parties formerly in Muhyiddin’s government as well as the opposition.

The king plays a largely ceremonial role but he appoints the person he believes has majority support of Parliament to be prime minister.

Muhyiddin took power in March 2020 after initiating the collapse of the reformist government that won 2018 elections. With a razor-thin majority in Parliament and an unstable coalition, he held office less than 18 months, making him the country’s shortest-ruling leader.

Before choosing Muhyiddin, Sultan Abdullah interviewed all 222 lawmakers individually then sought nominations from party leaders in an arduous selection process. His choice of Muhyiddin as the prime minister was disputed by the predecessor he ousted, Mahathir Mohamad, and the opposition.

An official from Mahathir’s party confirmed it has been invited to the meeting Tuesday.

The selection this time will be another tough chore for the monarch because no coalition can claim a majority. The three-party alliance that is the biggest opposition bloc has nominated its leader, Anwar Ibrahim. But the bloc has less than 90 lawmakers, short of the 111 needed for a simple majority. That’s also less than the 100 lawmakers believed to have backed Muhyiddin.

Other contenders include former Deputy Prime Minister Ismail who is from the United Malays National Organization, the biggest party in Muhyiddin’s alliance.

Local media said another possible candidate is Razaleigh Hamzah, an 84-year-old prince who was a former finance minister. Razaleigh, an UMNO lawmaker, is seen as a neutral candidate who could unite the warring factions in UMNO.

A leader from eastern Sabah state on Borneo island, Shafie Apdal, has also been named in the race. It is unlikely as his party only has 8 lawmakers but some say a leader from Borneo may be seen as acceptable to all.

But Mahathir, 96, has called for a national recovery council to be formed and led mainly by professionals to resolve the country’s economic and health crises.

The Bersih electoral reform group urged contenders to pursue political stability by offering multi-partisan governance and institutional reforms, and not just horse-trading over numbers and positions.

“The endless political machination due to winner-takes-all politics in a de facto hung parliament for the past one and a half year must now end to enable a more effective governance of health and economy. The new Prime Minister must quickly convene a special meeting and table a motion of confidence in himself to prove his majority,” it said in a statement.

It warned that a short-sighted and self-serving government would be punished by voters in the next election.