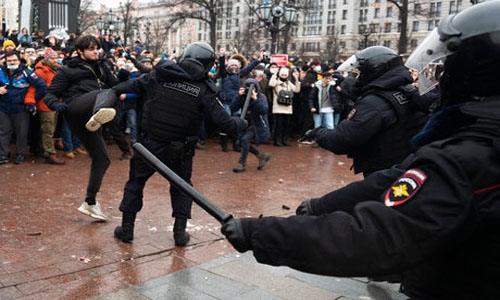 Nearly 3,500 protesters were arrested at demonstrations in support of jailed Kremlin critic Alexei Navalny, a monitor reported Sunday, as authorities probed violence on the part of both protesters and police.

Police clashed with demonstrators in Moscow as tens of thousands took to the streets across the country on Saturday following Navalny's call to demonstrate against President Vladimir Putin's 20-year rule.

A number of protesters were injured, including a woman in Saint Petersburg who was hospitalised with a head injury and was in intensive care Sunday.

The West condemned the arrests and "harsh tactics" used against demonstrators, with EU foreign policy chief Josep Borrell saying the bloc would discuss "next steps" on Monday.

Late Saturday the Investigative Committee, which probes major crimes, said it launched criminal inquiries in Moscow over the use of violence against law enforcement, hooliganism and property damage.

"Investigators are continuing to study and analyse a large amount of photo and video materials," the Committee said.

In a separate statement, investigators said Sunday a 36-year-old man hit two policemen at the Saint Petersburg protest and was detained.

But Saint Petersburg prosecutors also said they were probing violations "on the part of law enforcement" and the use of force against a woman.

The statement was released after local media published a video showing a middle-aged woman falling to the ground after being kicked by riot police.

In the video, a woman -- identified as Margarita Yudina -- is seen asking three policemen in full riot gear why they are detaining a young protester. One of the policeman then kicks her in the stomach.

"She is in a serious condition," a hospital representative told AFP on Sunday. "She's in intensive care."

Moscow authorities for their part insisted that no one remained hospitalised in the capital following the rallies.

Officials said in a statement on Sunday that 29 people were taken to hospitals and received medical assistance after the protests.

"No one required further hospital treatment," the statement said.

The head of the Kremlin's human rights council, Valery Fadeyev, said most of those detained in Moscow had been released.

He also defended the detentions, saying the protests were illegal and took place during a coronavirus pandemic. "I see no violations whatsoever," he said. "These events are illegal."

He also accused TikTok, a Chinese video-sharing app beloved by teens, of encouraging minors to participate in Saturday's protests. "This calls for an investigation," he said.

Moscow also accused US diplomats of publishing protest routes in advance of the demonstrations and of promoting a "march on the Kremlin" and said the representatives of the US embassy would be summoned by the foreign ministry.

A US mission spokeswoman said US embassies and consulates around the world routinely issue safety messages to US citizens.

"This is a common, routine practice of many countries' diplomatic missions," she told AFP.

The OVD Info monitor said police seized at least 3,435 demonstrators across dozens of cities, with 1,360 people detained in Moscow and 523 in the second city Saint Petersburg.

Saturday's protests took on an unprecedented geographic scale, spanning more than 100 cities across the country. Around 20,000 people protested in Moscow and more than 10,000 in Saint Petersburg, according to AFP estimates.

"I am certainly proud, very impressed and inspired," Volkov told AFP. Navalny's team is hoping to stage a new rally next weekend.

He is the target of several criminal probes and supporters fear authorities are planning to sentence him to a long prison term to silence him.