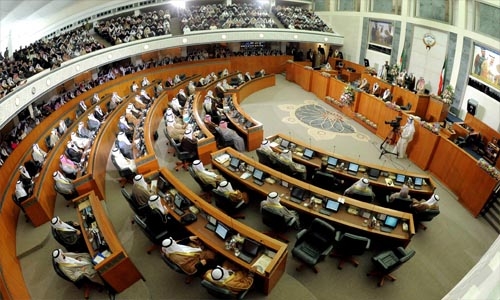 Kuwait government resigns less than a month after formation

About a month after its formation on December 14, the Kuwaiti government submitted its resignation Tuesday to Prime Minister Sheikh Sabah Al Khaled.

Government spokesman Tareq Al Muzrim said that the ministers had submitted their resignations to the Prime Minister and placed it at his disposal.

Kuwaiti media reported that the resignation of the government is expected to be accepted, with the existing government tasked with disposing of urgent matters until the formation of the new government.

This step came after three deputies in the parliament that was elected on December 5, and whose formation was dominated by opposition representatives, submitted a motion to question the prime minister on January 5, due to lack of cooperation with the National Assembly.

The motion, submitted by MPs Badr Al Dhahoum, Thamer Al Dhafiri and Khaled Al Otaibi, received the support of about 34 deputies. This means that at least 37 MPs out of 50 supported questioning the prime minister.

The government failed to show up at the National Assembly session that followed the presentation of the questioning motion, which caused the session to be suspended.

The interrogation revolves around three issues: The first concerns a blatant violation of the provisions of the constitution when forming the government, by choosing ministers in the cabinet that are aggravating and not taking into account the directions of the new parliament, which is dominated by MPs with opposing views.

The second issue dealt with the domination of the executive authority over the parliament through the government’s support for Parliament Speaker Marzouq Al Ghanem to win this position again, while 28 MPs voted for another candidate, in addition to the government’s interference in the formation of Parliament committees, according to the questioning statement.

The third issue revolves around the government’s procrastination in presenting its plan for this legislative term, which was considered by the interrogators as a breach of the constitutional obligation, that requires it to present the plan as soon as it is formed.

The Kuwaiti economy faces a deficit of $ 46 billion in the current fiscal year ending in March 2021, due to the COVID-19 pandemic and the drop in oil prices, according to former Finance Minister Barak Al Sheitan.

To overcome this dilemma, the government is seeking to pass a public debt bill that allows it to borrow 20 billion dinars ($66 billion dollars) over 20 years, which was turned down by the previous parliament.