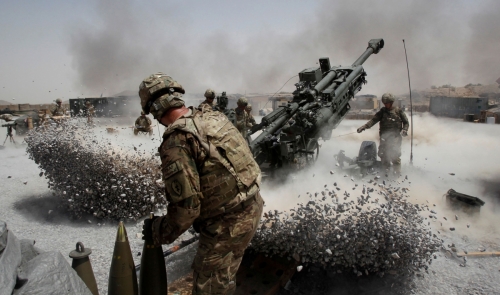 The ambush came despite Taliban assurances to Washington last week that they would reduce the bloodshed.

Security forces were attacked overnight Tuesday in Takhar province and fighting was ongoing, said Jawad Hejri, a spokesman for the governor, who put the death toll so far at 25.

"The Taliban had taken positions in the houses around the area. They ambushed our forces who were there for an operation against the enemy," he said.

Takhar provincial health director Abdul Qayoum said 34 security personnel had been killed -- including the deputy police chief of the province.

The Taliban did not directly take responsibility but said their fighters had "engaged the enemy" in Takhar to retaliate against security operations carried out against them.

Despite joining peace talks with the Afghan government in Qatar last month, the Taliban have only increased violence in Afghanistan in a bid to wield leverage in the negotiations.

A major assault by the militants in Helmand province forced thousands of families to flee their homes this month, while a car bomb Sunday near the police headquarters in Ghor blamed on the insurgents left 16 people dead and 154 wounded.

The UN refugee agency UNHCR said nearly 40,000 people had fled in Helmand, and called for aid to help the displaced.

"Disruptions in telecommunications, the threat of improvised explosive devices and the continued closure of the highway between Kandahar and Helmand following the destruction of several bridges are adding to the challenges," said Caroline Van Buren, the UNHCR's representative to Afghanistan.

Little progress has been made in meetings between Afghan government negotiators and the Taliban in Doha since the talks started in September.

"This level of violence, of course, makes the task of negotiating very difficult," said Nader Naderi, a negotiator for the Afghan government.

"Situations like this add to the sense of urgency for a ceasefire."

The top US envoy to Afghanistan, Zalmay Khalilzad, said earlier this week that fighting is threatening the peace process.

"Violence today remains distressingly high in spite of the recent reaffirmation of the need for a substantial reduction," he added.

US influence over Afghanistan's battlegrounds is on the wane, however, with the Pentagon looking to withdraw all its remaining troops by next May.

With US elections less than two weeks away, President Donald Trump is trying to make good on his promise to end America's longest war and pull back troops even sooner.

This has raised questions about Washington's insistence that its withdrawal from Afghanistan after 19 years of war is really "conditions-based".

The Taliban have been quick to exploit the apparent lack of resolve and began to push for fresh military gains as soon as they signed a withdrawal deal with the US in February.

More than 220,000 Afghans have been displaced by the conflict so far this year, the UNHCR said, adding to an overall figure of around 4.1 million people displaced in Afghanistan since 2012.