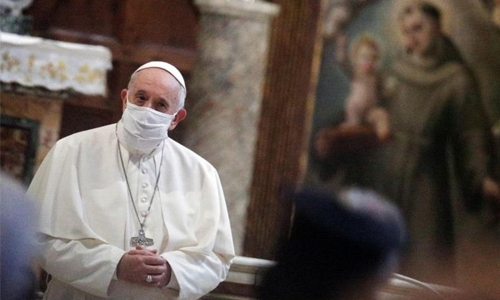 Pope Francis wore a mask for the first time at a public function yesterday when he and other religious leaders attended a prayer service for peace around the world. The pope wore a white mask during the service at the Rome Basilica of Santa Maria in Aracoeli. Previously he wore masks only in a car taking him to his weekly audiences in the Vatican.

He had come under some criticism, particularly on social media, for not wearing a mask at his general audiences and sometimes coming in relatively close contact with visitors. Pope Francis, 83, attended the service with other Christian leaders in the basilica, including the Patriarch Bartholomew, spiritual leader of Orthodox Christians.

Simultaneously in other locations in Rome, Jews were praying in the city’s synagogue and Muslim, Hindu, Buddhist and Sikh leaders also prayed for peace. The event took place as the number of people who have tested positive for the coronavirus has risen steadily in Italy in the past few weeks. Italy recorded 10,874 new coronavirus cases in the last 24 hours, up from 9,338 on Monday.