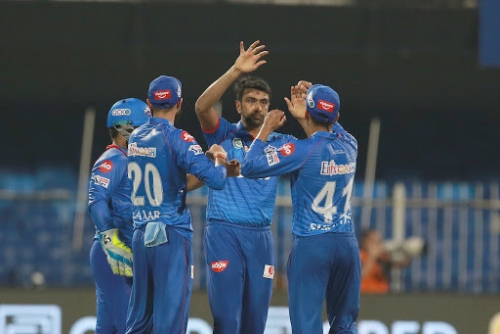 Delhi Capitals’ bowlers fired with the ball to carry their side to a 46-run win over Rajasthan Royals at the Sharjah Cricket Stadium yesterday. Shreyas Iyer-led side had scored 184 runs and the Royals fell 47 runs short of the target courtesy of some fine fielding and brilliant catching by Delhi Capitals.

Chasing 185 runs, Rajasthan Royals got off to a worst possible start as Ravichandran Ashwin dismissed star batsman Jos Buttler in the third over. Skipper Steve Smith then joined Yashasvi Jaiswal and the duo stitched a 41-run stand inside eight overs.

However, a brilliant catch in the deep by Shimron Hetmyer ended Smith’s stint at the crease in the ninth over. Smith’s wicket triggered a middle-order collapse as the Royals lost three wickets for 10 runs. Sanju Samson, Mahipal Lomror, and Andrew Tye all went after scoring in a single digit. Also, Yashasvi Jaiswal couldn’t capitalize on his slow start and went after scoring 34 runs in 36 balls.

The Royals kept losing wickets at regular intervals and were soon found reeling at 121/8. Rahul Tewatia kept fighting hard till the end and smashed timely boundaries to reduce the losing margin.