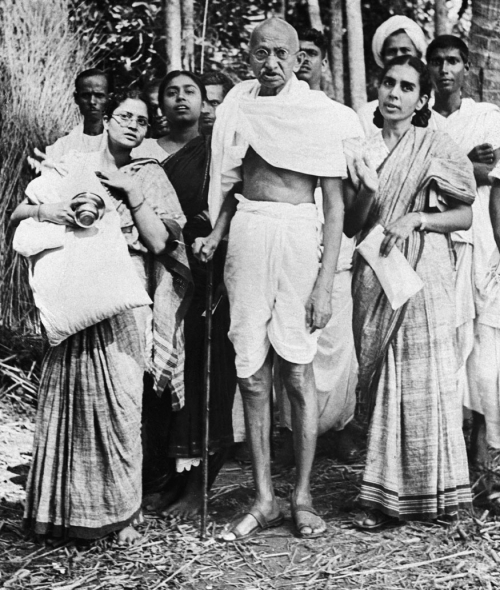 Have you got Gandhi with you? This was one of the frequently asked questions by my friends and classmates during my college days.

FYI - they were not asking whether I carried the great Mahatma deep inside my heart, but wanted to know I had bucks to sponsor movies or masala dosas (biggest revelry of those days)!

Gandhi never held any post nor wrote Indian Constitution. Since then, I have been thinking about Gandhi's presence on currency notes. Why Gandhi and not anyone else?

All I could arrive on was the trust factor. No Indian leader, before and after independence could earn the trust of people, like Gandhi. Everyone trusted this great leader, irrespective of caste, creed and religion.

Gandhi was a dynamic leader, someone who could read between the lines. History classes always taught us that Gandhi and his men walked 240 kilometres all the way from Sabarmati to Dandi to pick up some grains of salt. Why would have he done that when India was faced with a legion of issues to address?

His logic was simple; let's first earn the freedom to extract salt before demanding the nation's independence. His principles were simple and straight, no wonder it lured millions into his fold.

Even a good number of Britons supported his principles of non-violence during India’s freedom struggle. Gandhi remained a big hit in the UK, even after his death.

Anti-apartheid campaign leader Peter Hain, an ex-British Cabinet Minister, along with his followers dug up rugby fields to stop South African sportsmen from touring the country. Friends of the Earth protested by returning disposable bottles to Schweppes’s head office. Gandhian strategies have influenced the Brits in a big way. No wonder, the British Government released a stamp honouring the Mahatma 21 years after his death.

Gandhi’s charisma was so tall that he was perceived in different ways by different people. To my grandmother, he was a firm believer in God, who epitomized devotion. My father considered him as a marvelous political leader while my Economics teacher devised a “strange equation” . Gandhism plus violence is nothing but Marxism.

Those who read his autobiography would easily judge him as a philosopher, but to an entrepreneur like me, he was a corporate honcho, a successful industry leader like Robert McNamara or Lee Iacocca.

I started thinking on these lines after reading the book ‘Gandhi, CEO' by Alan Axelford. The author clearly states principles that can guide and inspire modern business leaders.

Here go the rules identified by Axelford: first put a face on policy and then get ready to be a lonely reader, embrace transparency, define your non-compromising zones, cultivate the courage of conviction, decide to do or to die, don’t wait, stay dissatisfied, expect success, boycott a bad bargain, opt out from an argument, give everyone a stake, respect everyone always, give everyone’s job a high profile, make your leadership organic, your company is your family, give uncommon people a common identity, recruit results not people, never surrender to mere orthodoxy, if your mind needs changing, change your mind, define your present reality, define the change you want, liberate the possible from the probable, be a quiet example, be an open book, choose your battleground, keep up your promises, think Utopian, formulate a hierarchy of options, process defines result, create genuine relationship not false labels, decline to be a victim, take responsibility and then take command, bring your enterprise out of its shell, argue against yourself, pick your fights and pick them wisely, competition requires a competitor, marry intellect with emotion and ultimately ask the question of truth.

After reading this, one would naturally agree that success is guaranteed in any sector if we follow these principles. But the bigger question that would probably haunt us is how can we be transparent and truthful, like Gandhi? Can we walk into a public function without wearing a shirt? Are we ready to throw the shoe on one foot after losing the other while boarding a train? Are we ready to turn the other side, if someone slaps in the face? Are we ready to walk 18 kms a day to protest injustice? Are we ready to fast until we die to succeed in a political issue?

I understand my frailty and thus acknowledge the tough road towards becoming a true Gandhian.

Whether Gandhi's followers agree or not, his principles comply with or not,the one Indian I would like to thank is liquor baron Vijaya Mallya for buying the Mahatmas specs after winning an auction in London .

He paid 1.8 Million US dollars to get back India’s most valid property and donated it to a central government museum. Whether you like it or not. I must be transparent enough to tell the truth as we celebrate the greatest human beings' 151th birthday!