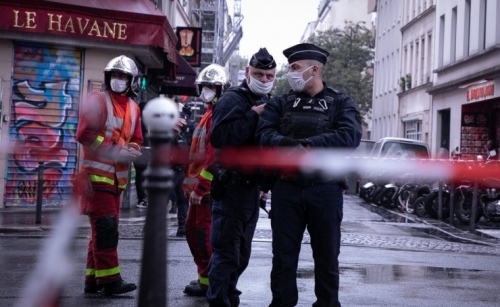 The suspect in Friday's cleaver attack near the former offices of Charlie Hebdo magazine in Paris is being formally investigated by the anti-terrorism prosecutor on suspicion of attempted murder related to a terrorist plan, the prosecutor said late Tuesday.

Previously, the prosecutor announced the suspect would be brought before investigating judges but that has been upgraded to a formal investigation.

The Pakistani national had admitted that he was actually born in 1995, and not in 2002 as he claimed when registering as an unaccompanied minor after arriving in France in 2018, national anti-terrorism prosecutor Jean-Francois Ricard told a press conference on Tuesday, Deutsche press agency (DPA) reported.

The suspect had told investigators that he had watched videos from Pakistan about the cartoons of the prophet Mohammed published by Charlie Hebdo in 2006 and again this year, Ricard said.

The magazine republished them this month to mark the trial of suspects accused of aiding two gunmen who killed 11 people in a 2015 attack on its offices in "revenge" for the cartoons.

The man told investigators that he was angry and decided to take it out on Charlie Hebdo, but did not know that the magazine had moved offices after the 2015 attack.

Ricard said that according to his statements, he initially planned to force his way into the magazine's offices and set them on fire.

But when he came across a man and a woman smoking beside a mural to the victims of the 2015 attack, he thought they were staff at Charlie Hebdo and attacked them instead with a butcher's cleaver.

Both victims suffered serious injuries, Ricard said. The man was still hospitalized in a serious condition with a fractured skull and was expected to be incapable of work for at least three months.

Ricard said a second person arrested on the day of the attack, and initially held as a suspect because he had been seen speaking with the main suspect on a metro station platform, had been "completely ruled out of suspicion."

The person in question, who according to French media was an Algerian immigrant who had been shocked to be arrested, "had in fact shown great courage by trying to catch up with the suspect and stop him," the prosecutor said.