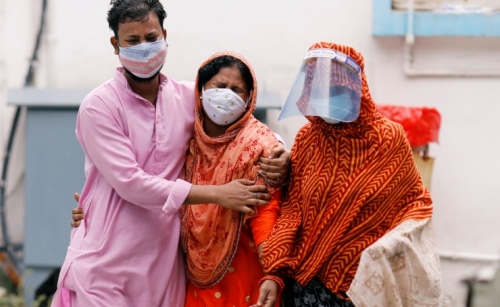 India’s coronavirus caseload is nearing 850,000 with a record surge of 28,637 in the past 24 hours, prompting authorities to announce a weeklong lockdown in the key southern technology hub of Bangalore. The new confirmed cases took the national total to 849,553. The Health Ministry on Sunday also reported another 551 deaths for a total of 22,674, The Associated Press reported.

India has overtaken Russia in the number of cases and is currently behind the United States and Brazil, according to a tally by Johns Hopkins University. Southern Karnataka state, whose IT hub Bangalore is home to Microsoft, Apple and Amazon offices, extended Sunday lockdowns to one week beginning Tuesday. New Delhi, Mumbai, Chennai, Bangalore and Pune are among the key Indian cities witnessing a surge in infections. Several states also have announced stringent lockdowns in high-risk areas.