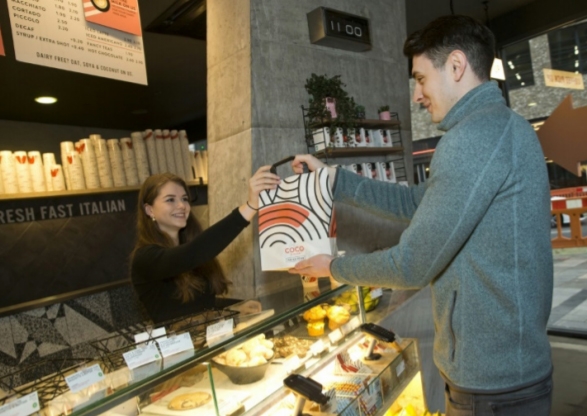 The 27-year-old Amazon employee -- with an eye for a bargain and for helping the environment -- uses a mobile phone app that sells surplus food from hundreds of UK restaurants at discounted prices. “Anything I can do to help the environment and look after the budget as well is beneficial, so yeah, it’s a win-win,” Convery tells AFP after collecting his bag from the counter near Old Street Tube station. “It ends up working out much cheaper than to go to (British supermarket) Tesco and buy a meal for one,” he adds, noting that he can usually source his daily dinner for about £3.50 ($4.54, 4.10 euros) via the app.

Decomposing food waste is a key source of greenhouse gases -- and a staggering one third of all food is thrown away, according to industry estimates. Environmental danger Amid growing public outcry over the climate emergency, consumers are switching on to the environmental danger of carbon dioxide and methane emissions.

Britain’s cafes and restaurants are also embracing apps that generate some revenue from rescued food that would otherwise be destined for landfill. However some restaurants happily give unsold food to homeless charities on a daily basis. Swedish start-up Karma was founded in Stockholm in 2016 and its app now helps serve 1.0 million users in Britain, France and home market Sweden. In the UK alone, it offers 2,000 outlets.

Rival app Too Good To Go also offers cut-price meals with a similar approach. Britain-based Olio, meanwhile, enables its 1.7 million customers worldwide to give their own unused food items free to other users, via collection from their homes. “We do not plan for the day to end with zero waste, because at the end of every day we want to have some stock on our shelves” for customers not using the apps, says Sara McCraight, head of branding at Coco di Mama.

“When we give to charity partners, that’s great. But with Karma we get some money recovered; (it) doesn’t cover costs but it helps.” ‘Apps are important’ Joao Campari, food expert at environmental campaigners WWF International, argues that apps are an “important” way to cut waste.

“With food loss and waste creating at least eight percent of all emissions, it’s vital that as many people as possible reduce their personal food waste,” Campari says. “To do this, we need tools that are easy to use, and also help raise awareness of the scale of the problem. “Most people have a mobile device so apps are an obvious and important way of educating and enabling action.

” Wastage occurs throughout the food supply chain: on farms, during transport, in retail stores like supermarkets. “In truth, the best way to cut emissions from food loss and waste is to prevent food being lost on the farm and in the supply chain before it reaches end-consumers,” adds Campari. Yet in developed nations, most food waste occurs in restaurants and private homes -- at a time when an estimated 820 million people in the world do not have enough to eat, according to the World Health Organization.

‘Main competitor is rubbish bin’ “We throw away one third of food we produce each year,” says Tessa Clarke, co-founder of Olio. “What that means is that roughly 10 percent of annual greenhouse gas emissions come from food waste alone, which I like to point out to people is four to five times greater than the carbon emissions that come from the global aviation industry.

” She adds: “I like to say that our main competitor is the rubbish bin.” While these apps are clearly benefitting consumers and food retailers, experts say they do not address the core problem.

“These are good for raising awareness but they’re not in themselves solutions, because there’s still food surplus or food waste being produced,” mulls professor Martin Caraher at City University London’s Centre for Food Policy. “With 10 billion meals a year still ending up in the bin, the UK has not closed the door on the food waste problem.”