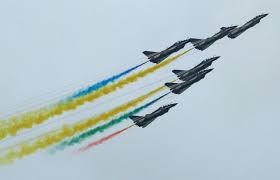 More than 70 exhibitors including US aerospace giant Lockheed Martin have pulled out of the Singapore Airshow over concerns about the coronavirus outbreak, but organisers insisted Sunday that Asia’s biggest aviation event would still go ahead. Precautionary measures -- including a major reduction in public attendance and temperature screenings -- have been imposed ahead of the opening of t heeventwhic h opens Tuesday in the city-state, which has reported 40 coronavirus infections.

Organisers were also encouraging attendees to greet each other by bowing or waving instead of shaking hands. Leck Chet Lam, the managing director of organiser Experia Events, confirmed that more than 70 exhibitors have decided not to participate, but said there was “still strong presence” at the show.

The biggest names in aerospace participate in the Singapore Airshow, and often massive deals -- such as aircraft orders from major carriers -- are announced at the event. The outbreak, which has killed more than 800 people and infected tens of thousands across China, has spread to nearly more than two dozen other countries and sparked global concern.

Many nations, including Singapore, have barred the entry of travellers who had been to China recently from entering or transiting through its territory to counter the spread of the virus. Despite that ban, the Chinese air force will take part in the air show for the first time.

The acrobatic team will participate in the flight displays  the highlight of the biennial event  but more than 10 Chinese companies have withdrawn. On Friday, Singapore upgraded its disease alert to the second-highest level on its fourpoint system.

Lockheed Martin, and plane maker De Havilland, pulled out after the alert l e v e l was raised. Canada’s Bombardier had already withdrawn. The South Korean air force’s aerobatics team had pulled out of the Singapore Airshow earlier this week because of the virus outbreak.