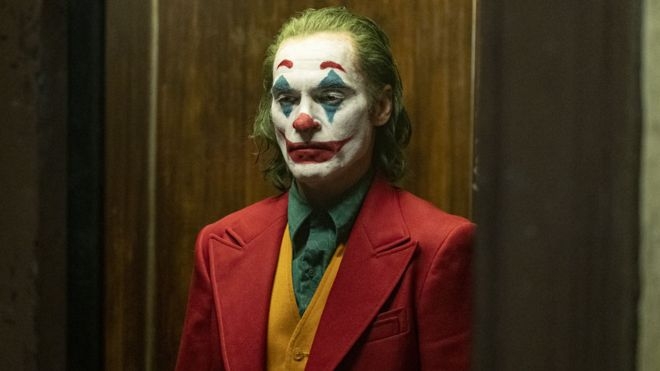 The nominations for this year's Academy Awards have been announced, with Joker leading the pack with 11 nods.

The comic book villain origin story is up for best picture, best director and best actor for Joaquin Phoenix, plus eight other awards.

The Irishman, 1917 and Once Upon a Time... in Hollywood follow with 10 nominations each.

Britain's Cynthia Erivo, Anthony Hopkins, Jonathan Pryce and Florence Pugh are all up for acting prizes.

At the Oscars, though, at least one acting contender - Harriet star Erivo - will be from a BAME background.

Yet the awards are sure to receive some censure for announcing another all-male line-up in its best director category.

Greta Gerwig, nominated for best director in 2018 for Lady Bird, did not make the cut again with Little Women.

Only five women have ever been nominated for the best director Oscar and only one - The Hurt Locker's Kathryn Bigelow - has ever won.

Like Joker, The Irishman, 1917 and Once Upon a Time... in Hollywood are all up for the best picture prize.

Phoenix is joined in the best actor category by Marriage Story's Adam Driver, Once Upon a Time's Leonardo DiCaprio, Pain and Glory's Antonio Banderas and The Two Popes' Pryce.

Scarlett Johansson is nominated for Marriage Story and gets another nod in the supporting actress category for Jojo Rabbit.

Johansson's Marriage Story co-star Laura Dern is also in the running for that award, as is Bombshell's Margot Robbie.

Kathy Bates and Pugh - nominated for Richard Jewell and Little Women respectively - complete the line-up in this category.

Brad Pitt is up for best supporting actor for Once Upon a Time... in Hollywood, as is The Irishman's Al Pacino and Joe Pesci.

Hopkins and Tom Hanks - up for The Two Popes and A Beautiful Day in the Neighbourhood respectively - are the other supporting actor nominees.

Netflix - the subscription giant behind Marriage Story, The Irishman and The Two Popes - has received more than 20 nominations.

These include two nods in the best animated film category, where its films I Lost My Body and Klaus are up against Missing Link, Toy Story 4 and the third How to Train Your Dragon film.

That means there is no room for Frozen 2, whose only nomination comes in the best song category for Into the Unknown.

Elton John biopic Rocketman also gets its only nomination in this category, alongside tracks from Toy Story 4, Harriet and Breakthrough.

That film's song, I'm Standing With You, marks the 11th time songwriter Diane Warren has been up for an Oscar - an award she has yet to win.

The 92nd Academy Awards will be held in Los Angeles on 9 February.

This year's ceremony, like last year's, will not have an overall host, with a variety of celebrity guests instead introducing each category.