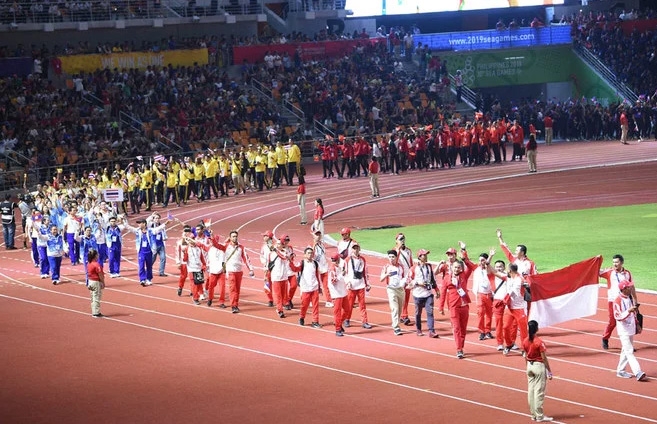 The 30th Southeast Asia Games ended on Wednesday with a rocking closing ceremony in the 20,000-seater purpose-built stadium in Clark, as host nation Philippines ran away winners with 149 gold medals.
After a chaotic start beset by organizational gaffes, a presidential apology and online mockery, the Games were briefly hit by a deadly typhoon, but organizers worked round the clock to get the schedule back on track.
“This year, Christmas has come early,” chairman of the organizing committee Alan Peter Cayetano said to thousands of flag-waving fans in the stadium after each country’s athletes had paraded by.
“We Southeast Asians, we Filipinos, have shown the world that we can do it with world class quality.”
Around 8,750 athletes and officials took part in the biggest-ever SEA Games across ten days of competition, involving sportsmen and women from 11 countries in venues across Clark, Manila and Subic in the country’s north.

Once the celebrations have died down however, organizers will face a government probe after the embarrassing build-up to the Games generated the wrong kind of headlines and a mocking hashtag #SEAGamesFail.

The Games were also slammed by Typhoon Kammuri which forced about half of the events to be rescheduled for one day.

Kammuri’s fierce winds toppled trees and flattened flimsy homes across a swathe of the nation’s north, and forced a rare 12-hour shutdown of Manila’s international airport.
Despite 13 deaths in the storm, none of the athletes, officials or 12,000 volunteers was reported hurt and a full program resumed soon after.
At the Games’ many venues there were disappointing performances for some of the region’s biggest stars.
Singaporean Olympic champion Joseph Schooling was expected to take several golds in the pool, but walked away with just one individual title.
The 24-year-old famously beat his idol, US legend Michael Phelps, at the Rio 2016 Olympics in the 100m butterfly final, but was out of form and out of shape just seven months away from Tokyo 2020.
And home favorite, the world champion gymnast Carlos Yulo, won just two out of the seven golds he was going for.