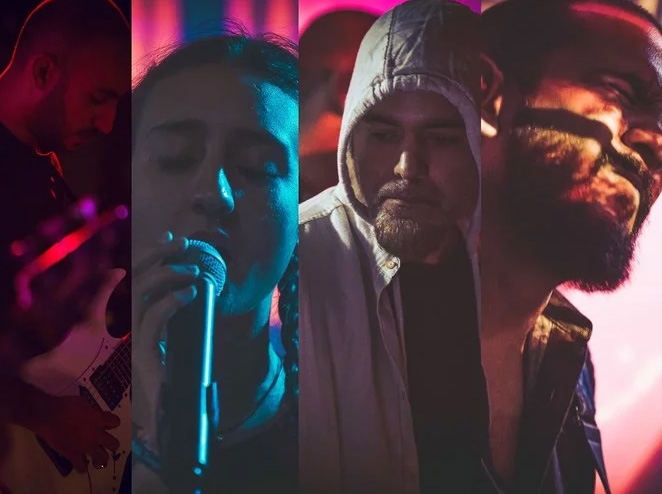 Although they’ve only been playing together for a few months, all four members — Sharma (musical arrangement and synths), Sara Al-Saeed (vocals), Ali Shirawi (guitar), and Ryan James (bass) — have been involved in the scene for a while. Sharma, for example, was previously part of the acclaimed Belly of Paris, who sadly disbanded at the end of 2016 as members moved away from Bahrain.

“We all loved Belly of Paris and didn’t anticipate that sudden end to it,” . “Afterwards, I went into a limbo. I felt ‘What’s the point of doing anything when you have no control over the circumstances?’ I stayed (away) from the music scene, stopped going out for gigs… It took me some time to take control over things and convert that void into music. The worst and best part of being an artist is that you can’t derive pleasure from anything else but the work you create. It’s a love-hate relationship. I kind of hate it in some moments, but I can’t do without it.”

Hence the delay in bringing OFFtrack together. “I have been working on my music for some time,” says Sharma. “But I could never find the courage or, most importantly, the right members who could decode my vague instructions and understand the sound I’m trying to achieve.”

According to the band’s online blurb: “The music is inspired by (a) dystopian state of being in this disconnected world and (the) ongoing chaos it entails.”

Spotting my blank look, Sumit takes pity and explains: “The disconnected state we live in now is a recurring and underlying theme of the album we’re working on. We are so connected, and yet so disconnected — we have all this information at our disposal but we are still lost. The world tells you that you can be whoever you want to be, but we don’t really know who we are. We are being constantly dragged away from our basic form and we have no control over it.

“OFFtrack exists in that space too — sometimes challenges and shouts at it and sometimes echoes its reality,” he continues. “Art has become a mere form of entertainment, whereas it played a much bigger and deeper role in history and society. Artists are the timekeepers of every generation.”

Of the band’s sound, he says: “I don’t think we fit into a genre. It’s noise, chaos, distortion, floating ideas. You can dive deep or stay buoyant — it depends how you react to it. I hope it has its own individual connection with people.” You can decide that for yourself when the debut album — on which the band are currently working — comes out.

OFFtrack recently performed at Sound and Fiction, a three-day conference and live music event in Bahrain organized by Museland, a record label and promotion company founded by Ali Al-Saeed, and in which Sharma himself is involved.

“When I took a sabbatical from music, I started noticing many things about the Bahrain music scene that I never acknowledged before,” says Sharma. “Sometimes you need to zoom out to see things clearly. So, I had this rough idea to create an alternate platform for music and to organize a music festival, which would represent Bahrain’s original talents. But I had no idea how to go about it. And then, out of nowhere, Ali got in touch and asked me to come on board. He established Museland almost a decade ago and stuck to his guns more than anyone I know. I hopped on board and we have some big plans for the coming year.”