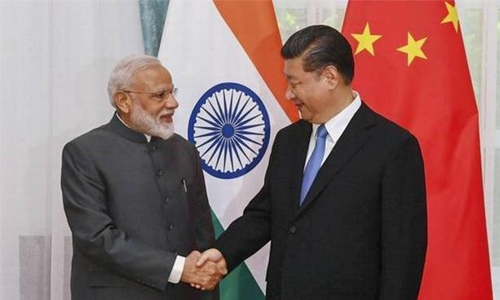 Modi to host Xi at summit

Prime Minister Narendra Modi will welcome Chinese President Xi Jinping at an informal summit this week, the Indian foreign ministry said yesterday. The meeting in Chennai on Oct. 11-12 is aimed at enhancing the rapport the leaders built when they met in the Chinese city of Wuhan last year to help stabilise ties after a standoff in another contested section of their long border, far removed from Kashmir.

“The forthcoming Chennai Informal Summit will provide an opportunity for the two leaders to continue their discussions on overarching issues of bilateral, regional and global importance and to exchange views on deepening India-China Closer Development Partnership,” the Indian ministry said in a statement. Srikanth Kondapalli, professor of Chinese studies at New Delhi’s Jawaharlal Nehru University, said it was important for the nuclear-armed neighbours to stabilise relations as both dealt with domestic and regional issues.

“The second informal meeting as such is significant given these ominous signals at bilateral, regional and global levels,” he said. Xi will also make a state visit to Nepal at the end of his India visit, the first by a Chinese president in 22 years, the Nepali foreign ministry said. During Xi’s visit, Modi is expected to raise economic issues, including India’s $53 billion trade deficit with China in 2018/19, and the smaller presence of Indian companies in China compared with that of other major economies.

China is expected to urge India to take an independent decision on telecom equipment maker Huawei’s bid for India’s proposed 3G network and not be swayed by US pressure.

Humans will not ‘migrate’ to other planets: Mayor