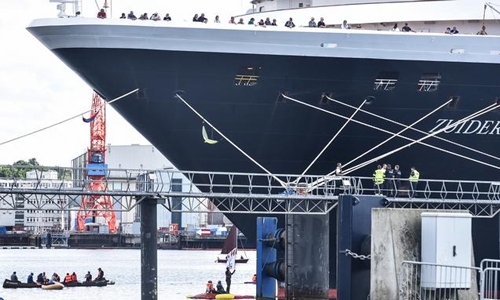 Climate activists using small boats and climbing equipment blockaded a cruise ship for six hours in a German harbour to protest against its carbon emissions, police said Monday. About 50 protesters with banners reading “Cruises kill climate” Sunday delayed the departure of the Zuiderdam, operated by Holland America Line, from the North Sea port of Kiel.

The ship finally left around 10 pm (2000 GMT) for Copenhagen after police had temporarily detained 46 activists. The activists were protesting against the “catastrophic local and global consequences of cruises” as well as what they claimed are the crew’s poor working conditions.

The group, which calls itself “Smash Cruiseshit”, said on Twitter that heavy fuel-powered “cruise ships contribute to the heating of the planet” and generate soot particles that settle on Arctic ice.