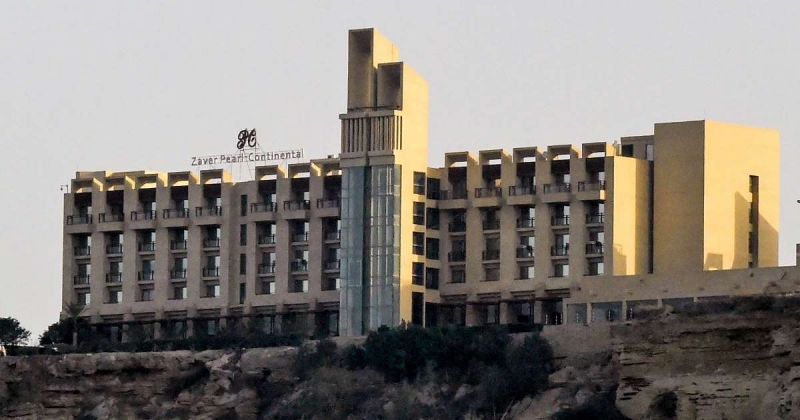 At least one person has been killed after three gunmen stormed a luxury hotel in the southwestern Pakistani city of Gwadar, the centerpiece of a multi-billion dollar Chinese infrastructure project, the military said yesterday. The gunmen shot dead a security guard at the entrance to the five-star Pearl Continental Hotel before entering, the army said. It was the second deadly attack to take place in a prominent Pakistani city this week.

“Security forces have cordoned area. Guests safely evacuated. Terrorists encircled by security forces in the staircase leading to the top floor. Clearance Operation in progress,” a military spokesman said. Earlier, Ziaullah Langu, the home minister for Balochistan province where Gwadar is located, told AFP four gunmen had “opened fire” on the hotel. “There are reports of a few people sustaining minor injuries,” the minister said. Mohammad Aslam, the on-duty officer in Gwadar, said ambulances and rescue officers were waiting at a road leading to the hotel, and that he could hear gunfire but that the operation was coming to an end.

“There were no Chinese or Pakistani guests in the hotel,” he said, adding that only staff was present in the building, adding that at least three are believed to be injured. A Baloch separatist group, the Balochistan Liberation Army, claimed responsibility for the attack via Twitter. The Pearl Continental, part of Pakistan’s largest five-star hotel chain, is the only luxury hotel in Gwadar, frequented by foreign and Pakistani business delegations as well as diplomats.