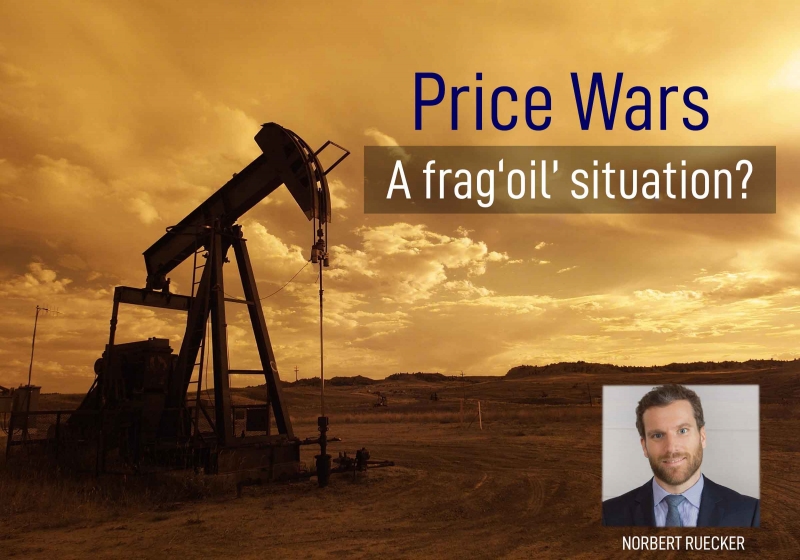 The oil markets suffer from the double shock of pandemics and politics, which pressured prices to multi-year lows below USD 20 per barrel. The collapse of oil demand is unprecedented, swift and deep.

Official US statistics provide an accurate and timely insight into the status of the oil market with the latest data offering a glimpse of the things to come: Gasoline demand plunges, refineries curtail production and storage fill at a previously unseen pace.

The market fears the risk that the supply glut overwhelms available storage capacity. The widespread lockdown pushed the world economy into recession. Mandated or self-imposed quarantine measures owing to the outbreak of COVID-19 chokes off mobility, the core of oil demand.

According to real-time indicators, mobility is down to 50%–70% of what it would normally be, respectively down to 20%–40% in the extreme cases including world air traffic and Southern European highways. We estimate that early April likely marked the trough of the global oil demand collapse, with consumption down more than 25% from normal levels.

The resources business struggles to adjust supply to changes in demand given its highly complex operations and asset intensity. This lack of responsiveness explains the business’ boom-and-bust periods, and the commodity market’s history of wild price swings.

The demand collapse calls for an equally drastic and fast supply response. However, some parts of the oil market are under government control and do not respond to price signals but rather to petro-nation oil politics. Unfortunately, Saudi Arabia and Russia had locked horns on supply policy just as the global economy pushed into recession.

Burying the hatchet, and giving the so-called OPEC+ framework another was a necessity in order to begin restoring the credibility of oil politics. The latest supply deal only comes into play at the beginning of May, which is somewhat late given the exceptional market situation.

In fact, with supply cuts falling way behind the demand collapse, oil storage is swelling and is set to stress test global capacity limits by May and June. These fears have put heavy pressure on prices and sounded the alarm bell to all market-oriented producers to shut-in output immediately on top of freezing investments. That said, there the demand could come to the rescue too.

The latest data out of China – the economy with a head start of going into and out of lockdown measures – indicates a potentially swifter than expected recovery in oil demand. Refinery activity in some areas is back to pre-crisis levels.

Traffic data even hints at above-average congestion, as commuters possibly shun public transport and prefer private cars. This uncertainty about the magnitude of the supply cuts and about the speed of the demand recovery suggest that prices continue to swing wildly in the very near term.

Oil price wars – impact for the long run The basis for a market rebalancing is set, a process, however, which takes time. The supply glut likely starts ebbing only later this year and then most likely take months if not years to disappear.

Full storage is set to keep oil prices below the pre-corona crisis levels for longer. All oil market actors will suffer from low prices, but for different reasons. In the near term, the focus is on US shale, wherewith prices below USD 30 per barrel, some producers can no longer cover their costs.

The manufacturing-like operations also mean that decisions not to drill come faster and have a more instant impact on production. Interestingly, today’s turmoil likely accelerates productivity gains and structurally lowers shale’s cost base, making this industry only more competitive in the longer term, the world past the corona crisis.

The industry will survive but some companies are set to disappear. ‘Big oil’ has built a presence in the shale basins that is too competitive globally - The washout will likely be less drastic than in 2015 because the fall height is lower and the starting point is not supercycle exuberance.

In the longer term, the petro-nations will suffer because their economies and governments require high oil prices. Their respective Sovereign Wealth Funds can plug budget holes only temporarily, for less than a handful of years.

The global downturn calls for more spending and thus aggravates the budget holes opened by the oil price decline there-by drying up of petro-dollar revenues.

For the long-term perspective on the oil market, two topics move into focus. Currently, Venezuela and Iran, two key suppliers are out of the market. Historically such supply disruptions never lasted long and supplies came back within years, for different reasons.

The Mexican energy reform, Venezuela rising from the ashes and Iran shedding sanctions could result in surplus supplies by 2025, putting pressure on oil prices. It is important to understand that petro-dollars are their economies’ lifeline and thus there are powerful incentives to bring oil back to the market.

Impact on climate change Already before the oil price sell-off, some companies’ access to capital tightened as investors and banks scrutinize oil demand growth under the concern of climate change.

Today, investments come to stand still and possibly set the basis for future undersupply and consequent oil price bounces. However, with the fast market share gains globally of electric cars and automakers swiftly expand their offering, oil demand growth is set to slow beyond 2025 and reverse beyond 2030.

The question for the oil market thus is what declines faster - supply or demand. Just as witnessed for coal over the past three years, which already is a structurally declining market, there might nevertheless be occasional price bounces upwards.

The oil industry has been adjusting for the energy transition already for years by investing in natural gas or by paying out large parts of the cash flow to investors. The fear about the storage stress test will burden oil prices over the coming days and weeks.

Beyond this, we see oil prices on a recovery beyond USD 30 per barrel by mid-year and beyond USD 40 by early next year. The mood looks as bearish as it can get with hedge fund futures positions heavily tilted to the short side.

Even in historic terms, the current oil price slump is exceptional, but comparable selloffs usually included a subsequent rebound from oversold levels. The crux for investors is, that this is what the oil futures market already anticipates.