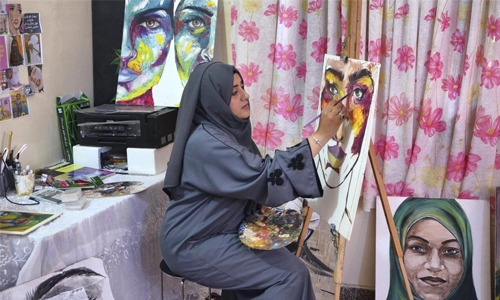 The woman fighting for the arts amid conflict in Yemen

Abeer Mohammed Al Hadrami stores about 100 of her own paintings in her parent’s three-room apartment in the port city of Mukalla, the capital of Yemen’s south-¬eastern province, Hadramout. You’ll find some inside or on top of cupboards, and even under her bed. Al Hadrami’s favourite stands out among them. It’s a 50 centimetre by 70cm piece that highlights the issue of child marriage.

In it, a grey-haired pregnant girl is depicted wearing a white wedding dress and carrying a small toy. An over-sized hand clutches her right shoulder. “This is the hand of the society or parents,” Al Hadrami explains. “I love this artwork too much.” The young artist was born in Aden, raised in the capital, Sanaa, and now lives with her mother and father in Mukalla, where Al Hadrami also has a small studio.

She has been interested in art for as long as she can remember. “At home, I used to decorate cups, clothes and plates, and art was my favourite subject during primary school.” She flashes a smile and winks at her mother, who nods her head and shares her own memories of her daughter who, as a baby, broke cups while trying to paint them. They both laugh as they explain how Al Hadrami scratched and scribbled her drawings wherever she could find an empty space.

It’s unsurprising then that she eventually pursued a career in art, particularly as the creative bug also runs in the family. “My sister, uncles and cousins are artists. My brother is a lute player,” she explains. She was clearly influenced by them as a child, but it wasn’t until she went to college thatAl Hadrami had the chance to truly explore her love of art, when she met a teacher who encouraged the budding artistto chase her dreams. “My teacher, Anwar, and my parents were the agents behind my early passion for art,” she recalls. “My amateur skills were polished when I was at college from 2010 to 2014.”

During those four years, Al Hadrami discovered different artistic mediums. “It was a different experience that helped me turn professional,” she says. She soon decided to focus on painting, making use ofthe constructive criticism she received from her teachers as she learnt as much as she could about the various theories and schools of modern art. “I now practise expressive painting,” she says.

It can take her anywhere from several hours to three days to produce a painting, and over the pastfew yearsAl Hadrami has taken part in more than 30 art exhibitions across Hadramout, as well as a show in Malaysia. She’s a founding member of Hadramout Talents, an independent non-¬governmental organisation that has brought together about100 artists – both men and women – from the area. Alongside several other artists, Al Hadrami is working to revive modern art in a city that’s all but forgotten about creative pursuits during a time of war.

Al Hadrami spends her time lobbying local artists to help her raise awareness ofthe importance of modern artin their conservative society, whether that’s producing paintings, sketches or even graffiti. The artists spend their savings at art galleries. “In the past, it was hard to convince the rich to fund galleries,” Al Hadrami says. “We worked hard on displaying our work to them.”

However, after several campaigns to raise funds and awareness, Al Hadrami says she feels local perceptions of modern art are beginning to shift. “There is a great understanding and appreciation of our artworks now,” she says. “As you can see, graffiti is covering street buildings and walls. The young artists imposed themselves on the society here.” Public officials have even stepped in to help her; Al Hadrami received funds from the governor of Hadramout, which meant she could take part in a show at an international art gallery in Cairo.

Still, Al Hadrami says such achievements are only another step in a much longer journey. While promoting art in her home town, she also works in an administrative role with an international aid organisation, while her parents give her pocket money, too. She’s also sold a few of her beloved paintings. “I sold a collection of my paintings in Malaysia for $2,000. I saved the money to buy a car,” she says. She also sold a painting for 1,000 Saudi Arabian riyals to a local art pundit.

“By selling theirwork, artists can buy materials and pay to participate in international exhibitions, as well as helping to arrange exhibitions ¬locally,” she says. Otherwise, it can be difficult for budding talents, she says, lamenting that international galleries usually only invite renowned artists from Yemen to exhibit. “We are struggling to build our names,” she says. Al Hadrami relies heavily on social media – predominantly Twitter and Facebook – as a platform to get her work seen, she adds. The ongoing conflict in Yemen also makes her career path in the art world far from clear.

In early 2015, when the Houthi rebels stormedAden,Al Hadrami watched ¬nervously as local military forces and resistance fighters flooded into the city. “During the fighting, my paintings that portray the army, the people and the war in Aden have increased,” she says. Despite all that she and her family have been through, however, Al Hadrami is confident her paintings have the potential to win international awards, if she could only get the chance to display them in front of a global audience. “I want to introduce my paintings to renowned painters,” she says.

“I have talked to some of those painters. They either cautiously respond to my messages or ignore them, simply because they do not know me.”