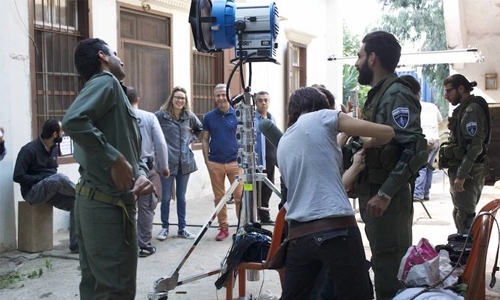 Farah Nabulsi had started out on a clear career path. Born and raised in the UK to Palestinian parents, she studied business in London and became an institutional equity stock broker at JP Morgan Chase. But life changed totally, she said, after she visited Palestine and witnessed the everyday indignities that Palestinians endure.

“It hit me like a ton of bricks how colossal this injustice is, and how 1948 is happening right now in the present day,” Nabulsi said, referring to the exodus of several hundred thousand Palestinians when Israel was established on their homeland. “That experience and first-hand knowledge changed me.

I knew that charity and sympathy were certainly not enough.” Nabulsi swapped her business suits and briefcases for cameras and film scripts. She took it upon herself to shed light on the injustices meted out to Palestinians since their mass displacement in 1948, known to Palestinians as the Nakba (Arabic for catastrophe). “With one foot in the West — having been born, raised and educated in London — and the other — my heritage, the blood running through my veins — in Palestine, I recognized the unique and rather powerful position I was in, so I changed the trajectory of my life,” she said.

The change was a big one, but the British-Palestinian filmmaker has not looked back ever since, saying the shift has been “absolutely liberating.” So far, Nabulsi has made three short films on Palestine. One ofthem, “TodayTheyTook My Son,” follows a mother as she copes with the trauma of her young son being taken away by the Israeli military. It was named an Official Selection at the Edinburgh Short Film Festival in 2016, and was a finalist at the International Short Film Competition at the USA Film Festival in 2017.

The other films, “Oceans of Injustice” and “Nightmare of Gaza,” have similar themes of Israeli prejudices against, and abuses of, Palestinians. “What I do is painful, raw and exhausting. Butthe satisfaction that I’m doing something with meaning — giving voice to the silenced, playing my part in informing and educating with the aim of ending injustice, and being able to use my creativity and my emotional IQ while doing that — has been a blessing I’m truly grateful for,” Nabulsi said.

“I have children of my own, and the very idea of a child being taken — usually in the middle of the night by armed soldiers, with no parent or adult with them, processed through a military system and subjected to all sorts of abuses — is just insane,” she added. “That(‘TodayTheyTook My Son’) was a film I didn’t choose to make.

I had to make it.” Nabulsi is working on her fourth shortfilm, “The Present,” which features Israeli-Palestinian actor Saleh Bakri. “It’s a beautiful story of a Palestinian father and his young daughter dealing with the indignities of checkpoints,” she said. “I’m looking forward to completing it and sharing it with the world.”

The woman fighting for the arts amid conflict in Yemen

US Dept of Justice investigates Deutsche Bank over 1MDB