Dwayne, Jason back with high-intensity fights in ‘Hobbs & Shaw’ | THE DAILY TRIBUNE | KINGDOM OF BAHRAIN 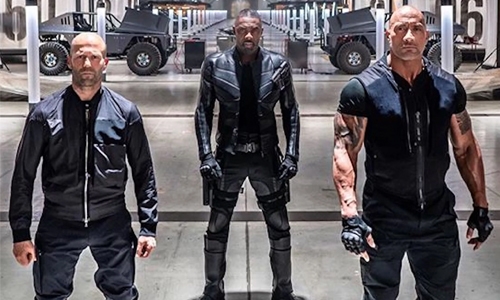 Dwayne, Jason back with high-intensity fights in ‘Hobbs & Shaw’

Fast & Furious Presents: Hobbs & Shaw (internationally known as Fast & Furious: Hobbs & Shaw) is an upcoming 2019 American buddy cop action comedy film directed by David Leitch, with a screenplay written by Chris Morgan and Drew Pearce, based on a story by Morgan. It is a spin-off from The Fast and the Furious franchise featuring two characters, Luke Hobbs and Deckard Shaw, in the leading roles.

The film will star Dwayne Johnson, Jason Statham, Idris Elba, Vanessa Kirby, and Helen Mirren and is scheduled to be released on August 2, 2019 by Universal Pictures. Picking up where The Fate of the Furious left off, DSS federal agent Luke Hobbs and former SAS operative turned mercenary Deckard Shaw, two men who intensely dislike each other, are forced to team up to stop a new threat emerging from Brixton Lore, a cyber-genetically enhanced international terrorist who created a deadly virus that could threaten the human race, leaving Hobbs and Shaw to form their own team to save the human race and the whole world.

In November 2015, Vin Diesel announced in an interview with Variety that potential spin-offs for The Fast and the Furious series were in the early stages of development. In October 2017, Universal Pictures announced a spin-off film centered around characters Luke Hobbs and Deckard Shaw and set a release date of July 26, 2019, with Chris Morgan returning to write the script. Variety reported that Shane Black was being considered to direct the film. The announcement of the spin-off provoked a response on Instagram by Tyrese Gibson, criticizing Johnson for causing the ninth Fast & Furious film to be delayed for another year.

In February 2018, Deadpool 2 director David Leitch entered talks to direct the film. In April 2018, Leitch was confirmed as the director for the film and added David Scheunemann as a production designer. In July 2018, Vanessa Kirby was cast in the film to play an MI6 agent and Shaw’s sister, along with Idris Elba to play the main villain role in the film. In October 2018, Eddie Marsan joined the cast of the film.

In November 2018, Eiza Gonzalez joined the cast of the film. In January 2019, Johnson revealed that his cousin and professional wrestler Roman Reigns would appear in the film as Hobbs’ brother. Additionally, he announced that Cliff Curtis, Josh Mauga, and John Tui would also portray the brothers of Hobbs. Helen Mirren was also confirmed to be reprising her role from The Fate of the Furious.

Found the superhero within me by looking in mirror: Lady Gaga