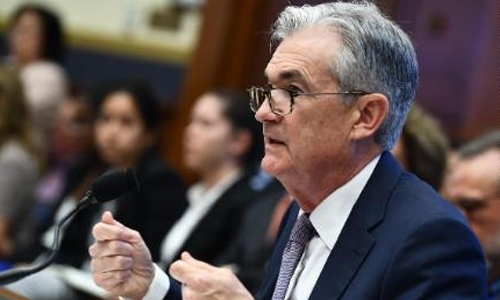 Federal Reserve Chair Jerome Powell yesterday left the door open to an interest rate cut this month, pointing to uncertainty about trade frictions and global growth. In his highly-anticipated testimony to Congress, Powell also reiterated that he would not step down should President Donald Trump attempt to fire him. And in remarks welcomed by Wall Street, Powell said many central bankers believed the case for lower rates “had strengthened” last month given the rising “crosscurrents” in the economy.

Investors took this as a clear signal a cut in the benchmark lending rate will be announced at the Fed’s next meeting July 30-31. The broad-based S&P 500 stock index on Wednesday hit 3,000 for the first time before pairing gains somewhat. For the moment, a rate cut also should satisfy Trump, who has been putting intense and constant pressure on the Fed to cut the benchmark interest rate and boost the economy, repeatedly criticizing Powell on Twitter and in public comments.

After raising the key borrowing rate nine times since 2015 as the economy expanded, most recently in December, the Fed last month opened the door to a rate cut amid signs of slowing. Powell repeated that sentiment in his prepared statement to the House Financial Services Committee, saying the central bank “would act as appropriate to sustain the expansion.”

And he said that in the weeks since the June policy meeting “it appears that uncertainties around trade tensions and concerns about the strength of the global economy continue to weigh on the US economic outlook.” At the same time, price measures watched closely by the Fed continue to run well below its two percent target.

‘I would not do that’

“Inflation pressures remain muted,” he said. “And there is a risk that weak inflation will be even more persistent than we currently anticipate.” Powell has brushed off Trump’s attacks, saying the Fed does not pay attention to politics. Under questioning from committee Chairwoman Maxine Waters, Powell said he would rebuff a demand from Trump that he resign. “Of course I would not do that,” Powell said.

“The law clearly gives me a four-year term and I fully intend to serve it.” And in his prepared remarks, Powell said that, in the wake of Trump’s aggressive trade policies, especially with China, businesses and farmers now “report heightened concerns” about the US economy. Meanwhile, disappointing growth in China and Europe raised fears a weak global economy could affect US growth and this has contributed to slowing business investment and waning confidence, he said.

Although the US economy expanded by a solid 3.1 percent in the first three months of the year, the Fed chief said that growth was based on factors, like exports, “that are not generally reliable indicators of ongoing momentum.” The Fed still believes the US economy will post solid growth, as labor markets remain healthy.

But Powell pointed to other domestic concerns that need to be addressed, including “high and rising federal debt.” In addition, he said, the “relative stagnation of middle and lower incomes and low levels of upward mobility for lower-income families are also ongoing concerns.”

Dwayne, Jason back with high-intensity fights in ‘Hobbs & Shaw’