Rising tide of hate speeches, a cause of concern | THE DAILY TRIBUNE | KINGDOM OF BAHRAIN 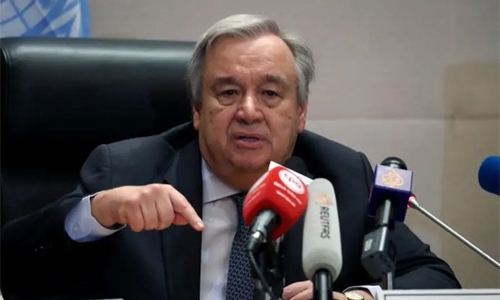 Rising tide of hate speeches, a cause of concern

Hate speech is being increasingly targeted around the world, and rightly so. Adding to the sense of urgency over the issue was UN secretary general Antonio Guterres, who last month said a “wildfire of hate” was spreading into the global mainstream and announced two UN initiatives in response: the first to co-ordinate efforts to combat it across the whole range of UN organisations, the second to help safeguard places of worship.

In such a climate, one would have thought the draft bill approved by the French National Assembly last Friday – which would require social media companies such as Facebook and Twitter to remove hateful content within 24 hours, or face fines of up to 4 per cent of their global revenues – would be unexceptional. New media has evaded being held to the same standards, codes of conducts and laws as “old” media such as newspapers, books and TV for too long.

It is high time these fabulously wealthy tech giants took their responsibilities towards free, hate and truthful speech seriously. But for some in America, France’s move has been greeted with consternation. “France has turned into one of the worldwide threats to free speech,” read the headline on an article in The Hill by Jonathan Turley, a law professor at George Washington University. Such laws, he wrote, had “already laid waste to free speech in Europe”.

The claim might seem hugely over the top. But it illuminates a very important distinction between the American approach to free speech and a host of related issues, and that of not only Europe but much of the rest of the world. It is commonplace to say that you are in favour of free speech. Likewise, nearly everyone would agree that there should also be limits. But Americans are, as Mr Turley puts it, such “hardcore believers in free speech. It runs in our blood”, that they argue for virtually no limits. The result is that the onus of being responsible in exercising that right has virtually disappeared.

Free speech has become so corrupted that it harms societies rather than helping to nourish them. In the US, the far right has worn the First Amendment as a badge of honour, believing it is entitled to say anything without consequence or reproach. All this is particularly worrying because opponents of censorship tend to look to the US as a shining example; as the country whose First Amendment to the Constitution prohibiting any “abridging the freedom of speech, or of the press” is a kind of holy grail to be emulated.

Nothing could be further from the truth, which too often has a tendency to get lost in a maelstrom of alternative facts, smears and falsehoods in America. To many of us, for instance, it seems extraordinary that the president of the US could be repeatedly accused of sexual assault and remain in office. In many other parts of the world, such an allegation would require the accused to either defend themselves or launch a defamation action. But libel laws are so weak in the US – that is, it is so hard to prove legally that anyone should be punished for having defamed you – that public figures face accusations all the time.

It was lies about his Vietnam record that may have cost then Democratic senator John Kerry the presidency in 2004. The discredited reports were so widely publicised, they spawned their own neologism, swiftboating. The bar for contesting accusations has been placed ever higher from 1964 onwards, when the Supreme Court made a series of rulings that in effect placed defamation and libel protection under the First Amendment, while laws against hate speech have been repealed.

In 1977 it was under this same amendment that the American Nazi Party was allowed to march, bedecked with swastikas, through the town of Skokie, a Chicago suburb that was home to a significant number of Holocaust survivors. These examples do not strike me as the kind of free speech worth protecting, let alone championing. It seems obvious that free speech must be limited by more than the restriction on shouting “fire” in a crowded cinema. Mr Guterres believes it is possible to keep hate speech from “escalating into something more dangerous, particularly incitement to discrimination, hostility and violence”, without criminal sanctions.

But at a time when extremist hatred for politicians has seen many murdered, this is a distinction that cannot be policed merely by condemning hate speech and countering it by the truth, as he advocates. As for “refusing to amplify it”, another of his proposals: nowhere has been more lawless and enforcement more lax than in the arena of social media. Of course, one has to be careful. I would argue there is no right not to be offended. History and matters of fact must still be discussed fully and frankly. Limits on free speech must always be properly justified.

But the idea propagated by First Amendment maximalists that more free speech will lead to a more educated and tolerant public and that hard legal force should be avoided has clearly failed in America. Mr Turley might be right when he claims that “most of the laws curtailing free speech in Europe would be unconstitutional in the United States”, but that is a problem, not a blessing, as he evidently thinks, for his country. This divide is starker than most people are aware. “Give me liberty, or give me death” might be a stirring statement.

But liberty means little if it does not protect you from character assassination, violent prejudice and death itself. French President Emmanuel Macron and Europe are to be commended for realising that free speech will not be defended by an absence of restraint. It depends instead on refusing to allow the abuse of liberty by those who would only deny it to others.