Is there any hope for peace left on Korean peninsula? | THE DAILY TRIBUNE | KINGDOM OF BAHRAIN 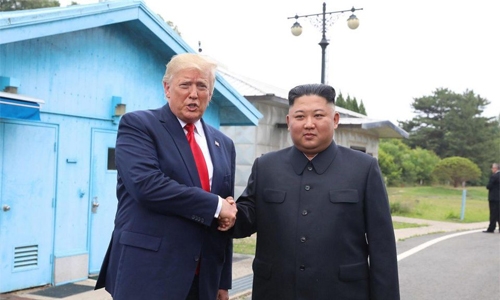 Is there any hope for peace left on Korean peninsula?

Barely four days after smiles and handshakes on the border of the demilitarised zone that divides the two Koreas, the walls have gone up once again. North Korea has accused the US of being “hellbent on hostile acts” and said it was “obsessed with sanctions”. Pyongyang has taken particular umbrage with the fact that at the same time as US President Donald Trump was pressing the flesh with North Korean leader Kim Jong-un, Washington was adding its name to a joint letter, together with the UK, France and Germany, calling on UN member states to abide by sanctions on North Korea.

So has all the goodwill of Sunday’s  impromptu summit  between Mr Trump and Mr Kim completely evaporated – or is there still an impetus for the US president to triumph yet in extracting a deal on denuclearisation from North Korea? No other US president has successfully managed to do so. Indeed, bad faith and cheating are endemic to US-North Korean negotiations – and not just on the Korean side.

In the 1990s, the US government dragged its feet over implementing a deal known as the Agreed Framework, which would have seen Pyongyang freeze the escalation of its nuclear weapons programme in exchange for two proliferation-resistant nuclear power reactors. It broke down when US intelligence discovered North Korea was enriching uranium. Amid strained relations, the deal was scrapped by the Bush administration in 2003 and North Korea withdrew from the Nuclear Non-Proliferation Treaty.

John Bolton, who was then undersecretary of state for arms control and international security, said it was “the hammer I had been looking for the shatter the Agreed Framework”. Both sides suffer from massive commitment problems. Each deeply distrusts the other, not only for obvious ideological and strategic reasons but based on past behaviour. The status quo of continuing hostility is deeply set. The previous US administration of president Barack Obama was committed to maintaining the status quo. But for one effort in 2012 called the Leap Day Deal, which would have involved a moratorium on North Korea’s nuclear weapons and ballistic missiles programme in exchange for food aid and concessions, Mr Obama was content with what he called “strategic patience”.

The US would contain, deter, isolate and sanction North Korea. Ideally this tightening vice would encourage the country to negotiate. But in practice, this meant holding firm to US-South Korean containment of North Korea going back to the 1950s. Mr Trump entered office determined, apparently, to up-end this status quo. By 2017, North Korea had attained both an intercontinental ballistic missile which could reach the US and a fusion nuclear warhead – one with 50 times the energy released in the 1945 Hiroshima bombing.

North Korea could now strike America with a very powerful weapon. Mr Trump felt compelled to respond. His first effort was to veer to the right, to follow the counsel of the hawks in his administration and threaten force. In 2017, the Korean peninsula was racked by the worst crisis since the Korean War. Rumours were rife that various US exercises were actually practice drills for pending airstrikes. The Japanese government practiced air raids. In South Korea, my wife and I stocked a “go-bag” packed with money, water and crackers. Mr Trump’s hawkish line toward North Korea was deeply unpopular though in South Korea. No US strike on the North would spare the South. Northern retaliation would likely fall on the South.

And if strikes escalated into full-scale warfare, possibly involving nuclear weapons and neighbouring countries such as China, Russia and Japan, South Korea would be obliterated in the crush. So severe was southern anxiety that South Korean President Moon Jae-In publicly stated that the US could not attack North Korea without South Korea’s permission. No South Korean president had ever asserted a veto right over the US use of force and Mr Trump would certainly have ignored it. But it symbolised the deep crisis that Mr Trump’s “fire and fury” threats had created. Then, as suddenly as it began, the crisis ended when Mr Trump flip-flopped to the left, adopting a dovish diplomatic approach.

In March 2018, Mr Trump abruptly announced he wanted to meet Mr Kim personally and even started hinting that he deserved a Nobel Peace Prize. Since then, Mr Trump and Mr Kim have met three times – in Singapore in 2018, in Hanoi early this year and in the inter-Korean demilitarised zone last weekend. Mr Trump has a great sense for televisual drama and theatricality. The summits have made for gripping viewing, arguably infotainment as much as diplomacy. But for all the grand imagery, such as Mr Trump becoming the first US president to set foot inside North Korea, he has still not extracted a deal on the core strategic issues which divide the North from the South and the US. What are those issues?

They fall into two broad categories – the political issues of the regime itself, and strategic or military issues in the regime’s relationship with the outside world, especially South Korea and the US. Political issues include the appalling human rights situation in North Korea, which the definitive United Nations report on this issue compared to Nazi Germany, as well as the Kim family monarchy, the extremely repressive police state apparatus and the quasi-theological cult of personality. These issues are very hard to change, as they cut to core of the regime’s identity.

Not surprisingly, the Trump administration has unceremoniously dropped human rights from its rhetoric since that first meeting with Mr Kim. Strategic issues include questions of the intra-peninsular military balance. North Korea now has several dozen nuclear warheads, hundreds of missiles with various ranges, mobile launchers from which to project those missiles and a massive forward conventional deployment of the North Korean People’s Army flush against the South Korean border.

Analysts expect little movement on core political identity issues but Mr Trump and Mr Moon have both raised expectations repeatedly on strategic issues. Yet so far, North Korea has not given up one warhead or missile. Despite all the talk since March 2018, there has been very little empirical movement on the ground. North Korea might no longer be testing weapons, which Mr Trump hails as a success, but it is now producing warheads and missiles. Every day, the problem grows worse.