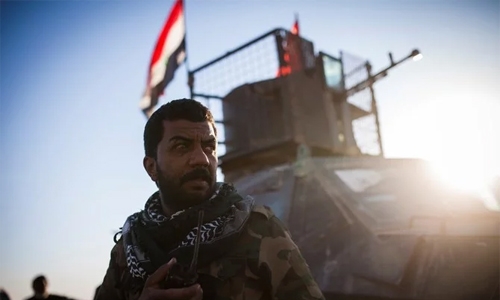 The recent trilateral meeting in Jerusalem, between Russia, the US and Israel, has been subjected to drastically different assessments: From those who melodramatically view it as a new Sykes-Picot for carving up regional influence (particularly as there were no Arab parties in the room); to those who skeptically saw it as a renewed agreement to disagree. Nevertheless, there appears to have been consensus about the necessity of curtailing Iranbacked militias in Iraq following escalating attacks against foreign military, diplomatic and oil installations.

US intelligence sources furthermore indicated that missile strikes against Saudi targets may have been launched by militants in southern Iraq. These factors contributed momentum to Prime Minister Adel Abdul Mahdi’s announcement last week that all paramilitary (Al Hashd Al Shaabi) elements must fully integrate into state forces and abandon previous affiliations. Combatants must stay out of politics.

The decree gave militants until July 31 to comply or be considered outlaws. This sounds like a major setback for Iran’s cultivation of sectarian paramilitaries. However, it’s only the latest of a succession of such stillborn initiatives. Following the end of set-piece battles against Daesh, these forces have squabbled amongst themselves; competing for influence in various localities, while rivalling one another across the full spectrum of criminal activities: From narcotics and extortion, to people-trafficking and money-laundering.

The cautious welcome from some senior Hashd officials may signal their hope that this decree represents an opportunity to overcome these chronic rivalries and make the movement stronger and more coherent. Qais Al Khazali said the decision would “halt all attempts to dissolve or merge” the Hashd. The Hezbollah Brigades, however, warned that “criminalising the mujahidin” would harm “elements supporting the security effort,” while the government’s priority should be removing US “occupation forces.” Another militia leader told AP that his faction had secret offices that would remain open.

The prime minister and Americans “are dreaming” if they think they can implement the decision, he boasted. Significant contingents of the security forces are under de facto control of the Hashd through its dominance of the Interior Ministry, and Hashd commander Hadi Al Amiri’s extensive security powers across central Iraqi provinces. Prime Minister Abdul Mahdi has proved remarkably ineffectual; at times merely a mediator between the Sadrists and Al-Amiri’s Bina coalition. After a year of wrangling, the appointment of the relatively unknown Yassin Al Yasiri (affiliated with Bina) as interior minister can be expected to allow Hashd/ Iranian dominance to continue.

The post-Saddam Hussein Iraqi state has played a futile game of legislative cat and mouse with Shiite paramilitary forces. Paramilitary leaders are experts in twisting the intended meaning of decrees to fit their purposes. They base their legitimacy as Al Hashd Al Shaabi on Ayatollah Ali Al Sistani’s famous June 2014 fatwa, mobilising volunteers against the Daesh threat. However, Al Sistani instructed volunteers to enrol in the regular military — not join militias. He stressed that all forces must fight under the Iraqi flag and should not have independent banners and identities. Militia leaders facetiously responded by sewing their own logos onto Iraqi flags.

Under Prime Minister Nouri Al-Maliki’s patronage, the principal militia factions had already been upscaling their activities prior to the establishment of the Hashd. Al Maliki secured the release from prison of notorious terrorists like Al Khazali and legitimised them with political positions. The 2014 creation of the Hashd merely consolidated this reality and allowed some militias to inflate to 10 times their size. When Al Maliki was replaced by Haider Abadi there were serious efforts to regularise the Hashd within existing military structures.

This was enshrined in 2016 legislation. Yet nothing changed. Hashd forces continued acting under their own separate identities, under local commanders, who ultimately took their orders from Quds Force commander Qassem Soleimani. Abadi issued yet another decree supposedly regularising the Hashd’s status in May 2018, just as Hashd leaders were defying the constitution by competing in elections. Iran isn’t simply going to walk away from 40 years of investment in its Iraqi assets just because the country’s weakest prime minister to date has decreed it so. While a sanctions-squeezed Tehran has reduced its financial outflows to the Lebanese Hezbollah and Syrian proxies, the Hashd is financed from the Iraqi state payroll. According to trusted sources, some Hashd funding is being syphoned off for Tehran’s benefit.

Current pressures thus make Tehran more dependent on these proxies; for sanctions evasion, revenue generation, widening its influence network, and alternative routes to retaliate against its enemies. At best, Hashd units may temporarily reduce their overt visibility before returning to business as usual when political pressure dissipates. I hear academics and decision-makers describing militias as an inextricable component of Iraqi political life. According to these defeatist assessments, we must simply acclimatise ourselves to this reality.

Yet representative political systems are incompatible with partisan paramilitaries who terrorise voters to engineer their preferred result — as happened during last year’s Iraqi elections. Iraq can’t function as a sovereign state while beholden to brazen Iranian interference. Coherent statehood or paramilitary anarchy? Iraq can’t have both. Tehran has repeatedly proven itself more capable than Washington in tenaciously implementing long-term strategies over extended periods of time; drawing down their investments when circumstances are against them, but steadily extending its regional dominance from one decade to the next.

It is futile for the Hashd to be disbanded, only for these militias to pop up again under different guises. Senior US and Iraqi officials have told me that Iraq’s overmighty militias can only be emasculated through military confrontation. Their eradication will thus require intense and sustained efforts with muscular foreign support. Abdul Mahdi’s decree is a laudable declaration of intent. Now we find out whether he and his international backers possess the leadership qualities and political will to make this a reality.

Is there any hope for peace left on Korean peninsula?