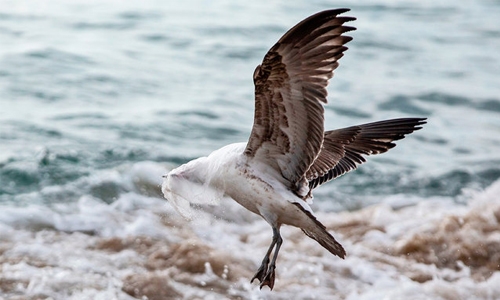 We need an urgent global response to the plague of plastic

Today, it has become clear that plastic is having a devastating effect not only on wildlife but on ourselves. It is now polluting every corner of our planet. I have seen first-hand, how it is choking our oceans and rivers. It entangles animals with lethal effect. It causes perforated stomachs and starvation. Mammals, birds, fish and marine invertebrates – over 180 different species in all – have been identified accidentally eating it.

But the impact on humans is less well known. Now a report published jointly by the conservation organisation Fauna & Flora International and others highlights for the first time the effect of plastic waste on the health of the world’s poorest people. It shows that 400,000 to one million people are dying every year as a result of mismanaged waste. If the upper end of this estimate is correct, then one person is dying every 30 seconds as a consequence of this dreadful pollution. A lack of waste collection in developing countries creates dumps of rubbish that provide ideal breeding grounds for rats, flies and disease-carrying mosquitoes.

Rain collecting in plastic food packaging is considered notorious for the breeding of dengue-carrying mosquitoes. Dengue is rarely fatal but it is an unpleasant disease leading to high fever and aching joints. Better management of water and waste could lead to an estimated 95 per cent reduction in the incidence of dengue. Many communities resort to burning waste releasing toxic chemicalsand increasing air pollution. This toxic cocktail includes black carbon, dioxins and mercury – all of which are direct threats to human health.

They increase the risk of diseases such as heart disease and cancer, respiratory ailments such as asthma and emphysema, skin and eye diseases, nausea and headaches and damage to the reproductive and nervous systems. The World Health Organization estimates that there are 3.7million premature deaths every year as a result of air pollution – and open burning is thought to contribute to around a fifth of these. As well as these impacts on human health, there are also huge economic costs. The United Nations Environment Programme has estimated that the damage to developing economies caused by plastic pollution of the oceans amounts to $13 billion each year.

Plastic packaging in poorer countries is increasing at an alarming rate and the sheer quantity is overwhelming the ability of these countries to manage it. If production continues unabated, global production will double over the next ten to fifteen years. In sub-Saharan Africa, plastic and waste production is projected to treble by the year 2050. Growth is fastest in the countries that are least able to deal with it. This global problem can only be solved if there is an urgent global response. First and foremost, we need leadership from the companies and governments that are responsible for introducing plastic into countries where it cannot be properly managed.

Multinational corporations are now packaging more and more of their products in single-use plastic. These companies should be required to disclose the number of single-use plastic items they sell in developing countries and to reduce this by half by the year 2025. The throwaway culture supported by wealthy countries is worsening this crisis. Plastic is cheap because the fossil fuels used to produce it are heavily subsidised. In the G7 alone, this amounts to more than $100 billion. A more circular model of plastic production and use must be developed if we are to reduce this pressure on the planet. Wealthy countries must also take more responsibilities for the waste they produce.

In 2017, Europe exported one sixth of all the plastic waste it created to Asia. The UK exports 650,000 tonnes of plastic waste every year. Until recently, over half of this was sent to China. China closed its borders to this traffic last year, and now we are dumping on other countries our rubbish, our dangerous rubbish. History is witness to the fact that when we put our minds to it, we can use our collective intelligence to solve our most pressing problems.

It is now time for governments, companies and citizens to work together to find solutions to a crisis that is entirely of our own making, a crisis that now threatens the collective well-being of all the inhabitants, animal and human, that live on this planet.

Washington’s dirty little secret: No one is running the show