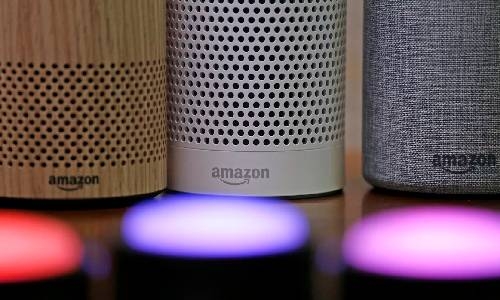 Do you miss the sound of a dead relative's voice?

Well fear not: Amazon unveiled a new feature in the works for its virtual assistant Alexa that can read aloud in a deceased loved one's voice based on a short recording of the person.

"While AI can't eliminate that pain of loss, it can definitely make their memories last," said Rohit Prasad, senior vice president and head scientist for Alexa, on Wednesday at Amazon's re:MARS conference in Las Vegas.

In a video played at the event, an Amazon Echo Dot is asked: "Alexa, can Grandma finish reading me 'The Wizard of Oz'?"

"Instead of Alexa's voice reading the book, it's the kid's grandma's voice," Prasad said. "We had to learn to produce a high quality voice with less than a minute of recording."

He added: "We are unquestionably living in the golden era of AI, where our dreams and science fiction are becoming a reality."

Indeed, the feature immediately drew comparisons to fictional depictions of technology, but ones more bleak than what Prasad was likely referencing, like Black Mirror, the dystopian television series that featured an episode in which comparable technology was deployed.

Reactions on Twitter ranged from "creepy" to "morbid" to "no," as many online expressed unease at a feature that brings a voice back from the dead.

The feature is still in development, and Amazon would not say when it might publicly launch, but its preview comes at a moment when the cutting-edge capabilities of artificial intelligence are under close scrutiny.

In particular, debate among researchers has sharpened about what is known as deepfakes — video or audio that is rendered with AI to make it appear as if someone did or said something that never happened.

It also comes shortly after a Google engineer sparked controversy for arguing the company's sophisticated chatbot communicated as if it was sentient, a claim that did not have the support of the AI research community but nonetheless underscored the freakishly human-like communication skills of the software.

Big Tech companies are increasingly studying AI's impact on society. Microsoft recently announced it was restricting the use of software that mimics a person's voice, saying the feature could be weaponized by those trying to impersonate speakers as an act of deception.