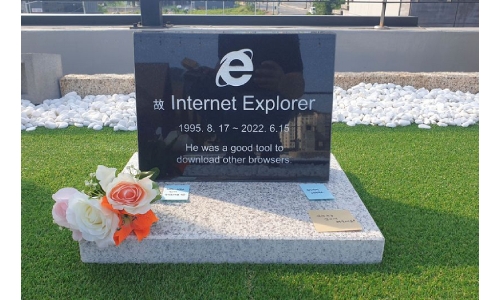 For Jung Ki-young, a South Korean software engineer, Microsoft Corp's decision to retire its Internet Explorer web browser marked the end of a quarter-century love-hate relationship with the technology.

To commemorate its demise, he spent a month and 430,000 won ($330) designing and ordering a headstone with Explorer's "e" logo and the English epitaph: "He was a good tool to download other browsers."

After the memorial went on show at a cafe run by his brother in the southern city of Gyeongju, a photo of the tombstone went viral.

Microsoft scaled down support for the once omnipresent Internet Explorer on Wednesday after a 27-year run, to focus on its faster browser, Microsoft Edge.

Jung said the memorial showed his mixed feelings for the older software, which had played such a big part in his working life.

"It was a pain in the ass, but I would call it a love-hate relationship because Explorer itself once dominated an era," he told Reuters.

He said he found it took him longer to make sure his websites and online apps worked with Explorer, than with other browsers.

But his customers kept asking him to make sure their websites looked good in Explorer, which remained the default browser in South Korean government offices and many banks for years.

There cannot be double standards on religiophobia: India at UN