Venice celebrates its 1,600th birthday without tourists | THE DAILY TRIBUNE | KINGDOM OF BAHRAIN 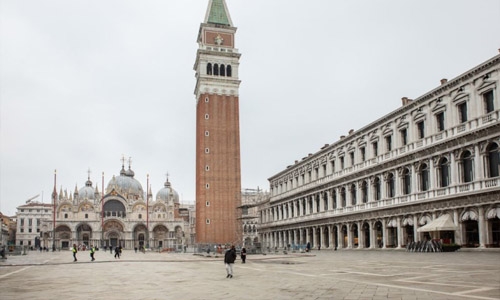 Just a week after a national day of mourning in Italy for the people who died during the pandemic, church bells are ringing out across the subdued city of Venice to celebrate its founding 1,600 years ago.

"Today begins a message of hope: Venice lives, Italy lives," Venice Mayor Luigi Brugnaro wrote on Twitter on Thursday, announcing a year of festive but socially distanced events, many of which are to be live-streamed online, dpa reported.

The city began marking the anniversary with a Mass in St Mark's Basilica, a famous cathedral on Piazza San Marco (St Mark's Square) in the centre of the old town.

In a picturesque city that was bustling with millions of tourists visiting every year before the pandemic, attendance at anniversary events is limited amid a renewed surge of coronavirus infections across much of Europe.

The celebrations come at a tragic time for Italy, following the March 18 anniversary of the day when harrowing images of military convoys carrying coffins out of the hard-hit city of Bergamo were broadcast around the world.

Churches were also set to ring their bells in the city in the afternoon to commemorate the foundation. The public television station Rai 2 planned to broadcast a special programme on the history and future of the city in the evening.

The legendary date of Venice's founding on 25 March, 421 is disputed among historians because of its sourcing.