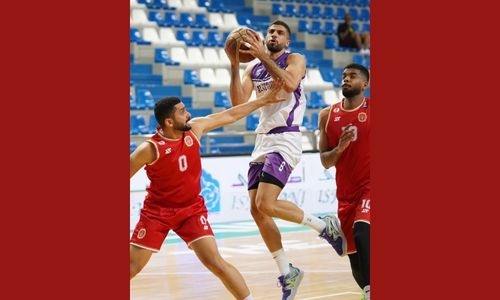 Title hopefuls Muharraq and Al Ahli both claimed big victories last night as part of the 10th week of action in the 2022/2023 Zain Bahrain Basketball League.

Muharraq pulled away late for a 100-92 victory over Al Ettihad while Al Ahli were dominant in an 89-52 rout of Nuwaidrat. Both contests took place at Zain Basketball Arena in Um Al Hassam.

Muharraq had to fend off a battling Ettihad late in their game after building a 15-point lead in the fourth quarter.

Ettihad got back to within striking distance and were within six points with just a minute remaining, but they came no closer.

Earlier in the contest, Muharraq had a slim 43-41 lead at the half, which they turned to a 69- 64 advantage heading into the final canto.

There, they appeared to be headed to a comfortable result but their rivals made a game of it in the closing minutes.

Bader Abdulla Malabes sank two free-throws with under a half-minute left to put Muharraq back up by double-digits and virtually ice the contest.

Malabes finished as his team’s top scorer with 24 points while Abdulla Rabeea added 22 off the bench.

Mahmood Abbas Isa scored 20 and Baqer Isa chipped in with 17, also as key substitutes for Muharraq.

Adrian Uter had 34 to spearhead Ettihad in the loss while Sayed Mohammed Hameed had 17.

The result earned Muharraq their fifth win in seven games as they moved into the top half of the table while Ettihad suffered their third loss to go with five wins.

In Ahli’s win, they took a commanding 24-13 lead at the end of the first quarter and never looked back.

Ahli enjoyed leads as big as their final winning margin of 37, thus securing their seventh victory in as many games and remaining as the league’s only unbeaten team.

Hesham Sarhan chipped in with 17 and Subah Hussain had 10. For Nuwaidrat, Murtadha Salman and Mohayed Ameer had 10 points apiece as their leading scorers.

They dropped their sixth game in eight tries and stayed in the bottom half of the league table.

League action continues tonight with a single game on scheduled.

At 6pm, Samaheej and Isa Town lock horns in a battle between the league’s two bottom-ranked clubs.