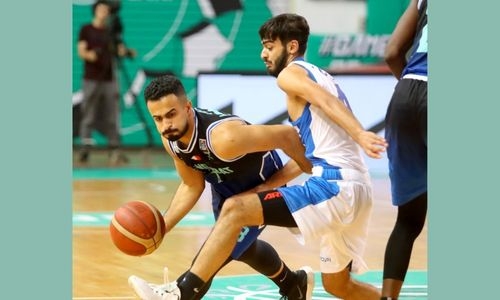 Al Ettihad and Nuwaidrat were last night triumphant in their respective week two games of the 2022/2023 Zain Bahrain Basketball League. Ettihad were too good for Samaheej in a 106-94 win, while Nuwaidrat defeated Isa Town 83-71. Both games were played at Zain Basketball Arena in Um Al Hassam. In Ettihad’s victory, they overturned a 23-26 deficit at the end of the first quarter to take a narrow 50-45 lead at the half. They widened the gap to as big as 19 the rest of the way, securing their season-opening win after having a bye in the league’s first week of play.

Adrian Uter and Sayed Mohammed Hameed combined for 60 of Ettihad’s output, with Uter finishing with a gamehigh 33 points. He also had 16 rebounds and six assists in an all-around effort. Ali Ghadeer chipped in with 15 and Sayed Kadhem Majed had 13 for the victors. Stephen Hurt had 33 points and 15 rebounds for Samaheej, who suffered their second successive defeat. Ahmed Mohammed Jafar and Basel Adel chipped in with 20 apiece.

In Nuwaidrat’s win, they led by as many as 22 points early in the second half and held on to their advantage until the final buzzer. Isa Town were able to reduce the deficit to single digits with just under two minutes to go, but it was too late to mount a comeback. Shaquille Thomas spearheaded the winners with 23 points and 11 rebounds, while Mohayad Ameer added 17 and Sayed Hashim Habib had 16 off the bench. For Isa Town, Talal Qaheri and Mohamed Nabeel scored 16 apiece, while Oumar Barry scored 13. Nuwaidrat claimed their first win of the season while Isa Town suffered their first loss. League action continues tonight with Muharraq facing off against Bahrain Club at 7.30pm.