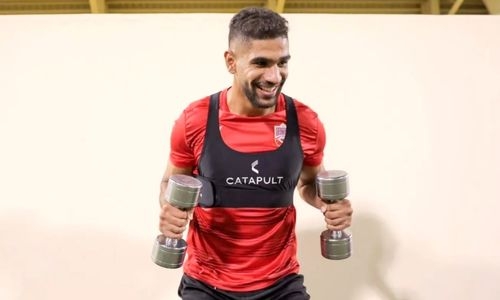 Bahrain’s senior men’s national football team continue to gear up for their friendly match against Cape Verde on Friday, which will be the first of two tune-up games during their ongoing local training camp. The Cape Verde national team has already arrived in the Kingdom and they held their first training session last night at the Manama Club premises in Juffair. Friday’s match will be played at the National Stadium in Riffa. It is scheduled for a 7pm kickoff.

The nationals are preparing for their upcoming competitions, including their highly anticipated title-defence in the Gulf Cup and the AFC Asian Cup, both happening next year. The Bahrainis will also be facing off with Panama on Tuesday next week in their second friendly of this period. That game will close out their camp, which is being supervised by Portuguese head coach Helio Sousa.

The nationals kicked off their training last week and on Monday welcomed striker Abdulla Yusuf to their practice sessions. Yusuf was the latest player to join the squad after completing his club commitments with Indonesia club Persija Jakarta. Cape Verde are in Bahrain with a 24-player squad. All their national team players play overseas with clubs from Portugal, Angola, Hungary, Morocco, Bulgaria, France, Slovakia, the Netherlands, Serbia, the US, the UAE, Greece, Spain, Austria, Scotland and Belgium.

Cape Verde’s head coach Pedro Leitao Brito, commonly known as Bubista, was quoted as saying about the upcoming friendly with Bahrain: “We always face friendly matches with the logic of improving our team in all aspects. “We have to improve, for example, in the quick recovery of our players after the games at their clubs and then travel to play two qualifying games in six days.

“What we have best are our players, so we need to take good care of them and then ask for respect and responsibility with our people and the country.” The friendlies are the second and third warm-up games scheduled by the Bahrain Football Association for the senior men’s team.

They have added to the game Bahrain will be playing against FIFA World Cup 2022 participants Serbia on November 18, also at home. Both Cape Verde and Panama are classified above Bahrain in the FIFA World Ranking. Cape Verde are in the Confederation of African Football, and they are currently 73rd in the world. Panama, in the Confederation of North, Central America and Caribbean Association Football (CONCACAF), are ranked 61st in the world.

Bahrain are currently 85th on the FIFA World Ranking. The upcoming Gulf Cup is scheduled to take place in Basra, Iraq, from January 6 to 19. It will be the 25th edition of the prestigious competition. The Asian Cup 2023 will take place in June and July at a yet-to- be-determined venue.