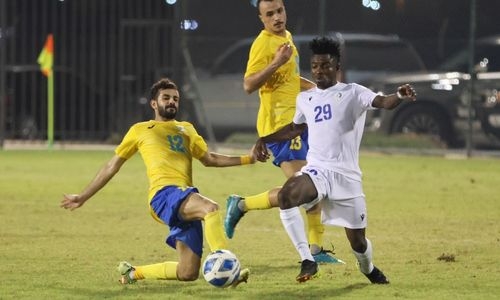 Galali and Tadhamun both advanced last night to the second round of this season’s His Majesty the King’s Cup in football. Galali powered past Bouri 3-0 while Tadhamun marched through with a 3-0 penalty shootout win against Etehad Al Reef, after the match remained goalless at the end of regular time. Galali next lock horns with Sitra in the second round, while Tadhamun move on to play Al Ettihad. In Galali’s triumph, three different players fired in goals.

They included Naser Mohamed Jasim, Adriano Soares Filgueira and Ayoob Salahaldin Ebrahim. In Tadhamun’s win, on target in the shootout for the victors were Ali Hasan Jaffar, Romeo Bonou Tomeh and Abdulla Ali Mohamed. Galali and Tadhamun joined Isa Town and Busaiteen as teams to march through to the competition’s second phase. Isa Town had earlier beaten Aali 4-2 on penalties while Busaiteen edged past Um Al Hassam 2-1. In round two, Isa Town face Al Ettifaq while Busaiteen take on Al Malkiya.

All four contests are scheduled to be held on Wednesday next week. Al Khaldiya are the holders of HM the King’s Cup after winning last year’s final against East Riffa on penalties. Both sides have byes from the opening two stages. The HM the King’s Cup football tournament is a knockout competition that is the richest in Bahrain.