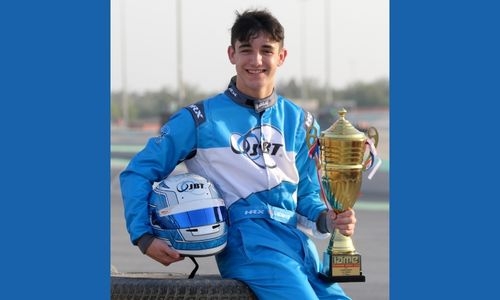 Sixteenyear-old Briton Lewis Smith, one of the brightest young talents to come from Bahrain’s motorsport community, is all set to continue his busy European summer programme this weekend at one of the leading karting tracks in Belgium.

Lewis, a student at British School of Bahrain, will be suiting up to compete in the IAME Series Benelux—a premier karting championship featuring drivers from all over the world, particularly from Belgium, Holland, Luxembourg, Finland, France and many other nations. He is set to hit the tarmac tomorrow and Saturday at Karting Gent track in Belgium—a 1.360-kilometre, FIA-homologated circuit that has hosted the Karting World Championship in the past and just earlier this year staged the European Karting Championship. Lewis will be racing in the series’ X30 Senior class featuring karts powered by 125cc IAME X30 engines.

It will be his second event of the summer, having previously put in an impressive showing in another IAME event in Genk held last month. Lewis has already been in Belgium for over a week preparing for the upcoming bumper-to-bumper battles with his coach Rashid Almuammari, himself a renowned Bahraini karter. Lewis commented: “I’m greatly looking forward to getting back to some high-level racing this weekend and competing in the IAME Series Benelux.

“This is a top championship that attracts many really talented drivers and I cannot wait to go up against them. “I’ve been training daily with my coach and we’ve worked really diligently to get me best prepared for what’s to come. I expect it to be another huge challenge, but that’s what I am here for and it can only help me get better as a driver. “I’d like to say a big thank you to all those who are supporting me and cheering me on to do well, especially my family and friends in Bahrain’s motorsport community.

To have everyone’s backing is very encouraging and I hope to make everyone back home proud.” Testing and the first official free practices of the weekend will be held tomorrow, to be followed on Saturday by the concluding free practices, which will set the stage for the qualifying heats and the finals. This weekend’s meeting will mark the fourth of five rounds in the IAME Series Benelux’s 2022 calendar. Lewis is set to be one of more than 250 drivers taking part in the championship’s various categories.

Following the event, he is scheduled to wrap up his summer programme with a round in the IAME Euro Series 2022, also to be held at Genk, from August 25 to 28. As one of up-and-coming young karters who has been honing his skills in Bahrain, Lewis regularly competes in national, regional and international championships and continues to excel at all levels. Lewis is regularly looking for support from Bahrain companies for sponsorship opportunities, which would offer exposure all across Europe and within the Kingdom of Bahrain. Those interested in backing such a rising star in the motorsport sector can contact Lewis’s parent Tony Smith on mobile +973-32200420.