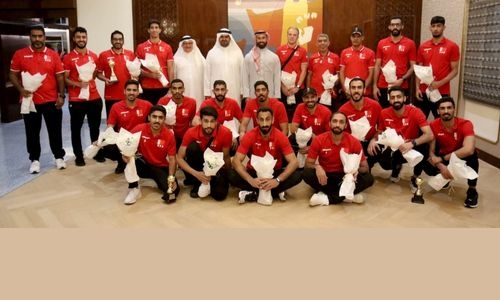 Bahrain’s senior men’s national volleyball team received a hero’s welcome late Monday night upon their return to the Kingdom from Thailand, where they won the bronze medals in the 2022 AVC Cup for Men. It was an historic achievement for the Bahrain is , who were making their debut in the prestigious Asian Volleyball Confederation competition.

The nationals, coached by Issanaye Ramires from Brazil, had 14 players on their roster in the AVC Cup for Men. They included setters Mahmood Hasan and Mahmood Alafyah; wing spikers Naser Anan, Mohamed Abdulla, Mahmood Ahmed and Yusuf Ali; opposites Mohamed Anan and Ali Khamis; middle blockers Abbas Al Khabbaz, Husain Aljeshi, Mohamed Abdulla and Mohamed Aldawiri; and liberos Ayman Haroona and Husain Sultan. Aside from the bronze medals, Mohamed Abdulla also took home an individual award for being the Best Outside Hitter while Sultan came away with the honour of Best Libero.