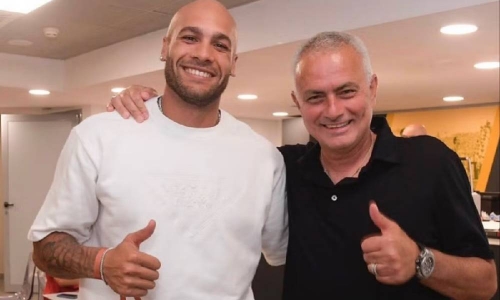 AS Roma manager Jose Mourinho left his fans wondering if sprinter Lamont Marcell Jacobs would have made a great footballer in another life after jokingly showing off the signing of the Olympic 100 metres champion on Monday.

While the Special One’s approach to fantasy football may seem unorthodox, Mourinho has no doubts Jacobs would be a perfect fit at Roma. Not only would the Italian be the fastest man in Serie A, but also the most versatile.

“Super fast, dominant, technically perfect. Can play as a defender or striker...” Mourinho said in a post on social media next to a picture with the 27-year-old athlete one day after Roma’s 5-0 friendly win over Ukrainian side Shakhtar Donetsk.

Roma superfan Jacobs, who was gifted the No. 12 shirt during his visit to the capital club, was ready to leave athletics behind to be Roma’s next big signing in the close season after Argentina forward Paulo Dybala joined the club in July.

“(I play) where do you want mister,” he replied to the Portuguese coach in a comment and shared the post on his own profile asking Roma when he would start.