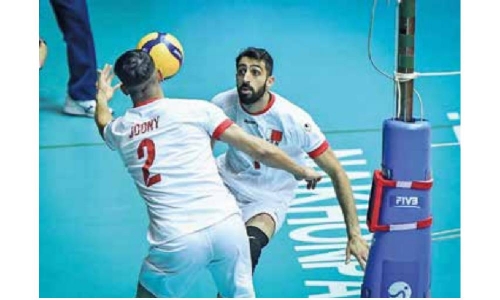 The nationals had a brilliant start and took the early match advantage in the first set. But their opponents rallied back and were able to close out the contest in four to finish the preliminaries as winners in Pool D.

The Bahrainis were classified second, and despite the loss, advanced alongside the Chinese to the competition’s main round where they will play in Pool F alongside Pool B teams Iran and Pakistan. Chinese-Taipei, who finished third in Bahrain’s group, will next play in Pool G for the final classification from ninth to 11th overall.

The result of Bahrain’s game with China yesterday carries over to the ensuing stage. The nationals will thus only take on Iran tomorrow and then Pakistan on Friday. In Bahrain’s loss yesterday, the nationals made a number of service errors that cost them crucial points throughout the contest. In the first set, Bahrain fell behind early but fought back to tie it at 18-all with a Mohamed Abdulla block.

China regained the lead but Bahrain tied it once again at 21-apiece with back-to-back points from Abbas Al Khabbaz and Mohamed Anan. It was a see-saw affair from there and following a service error by Naser Anan and a brilliant spike by Abdulla, the score was level at 27-all.

The Bahrainis then sealed the opening and the 1-0 advantage with a Mohamed Anan ace and a powerful smash from Abdulla. The second set saw China power ahead midway through and secure the frame by six points to tie the contest at 1-1.

Then, in the third, the Bahrainis faced an 11-16 deficit and never recovered. The fourth set was close and Naser Anan spikes tied the score at 11-apiece and later 14-all. Al Khabbaz then gave Bahrain a 15-14 edge, but the Chinese responded and went up 18-16.

The nationals tried to stay in contention, but their opponents made the key plays in the end to come away with the hard-earned win. This year’s AVC Cup for Men features 11 of the top senior men’s national teams from all over Asia and Oceania. Following the preliminaries, hosts Thailand and South Korea advanced to Pool E in the main round from Pool A in the preliminaries.

They are joined in Pool E by Japan and Australia, who made it through from Pool C. Results from Pools E and F will set up the clashes in the tournament’s semi-finals. The 2022 AVC Cup for Men is scheduled to conclude on Sunday with the gold and bronze medal contests.