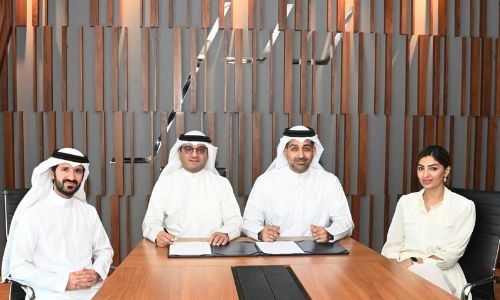 Seef Properties has recently announced its platinum sponsorship of the ranking tournament organised by the Bahrain Padel Federation titled “Seef Properties Ranking Tournament”. The tournament will be held on the grounds of “Let’s Padel Centre” in Seef District from today till Saturday.

The platinum sponsorship agreement was signed by Ahmed Yusuf, CEO of Seef Properties, and Yousif Juma, Vice Chairman of the Board of Directors of the Bahrain Padel Federation. Seef Properties’ platinum sponsorship of this tournament comes in line with the vision of His Highness Shaikh Khalid bin Hamad Al Khalifa, First Deputy Chairman of the Supreme Council for Youth and Sports, Chairman of the General Sports Authority and President of Bahrain Olympic Committee, to promote the sport of Padel among the youth in the Kingdom of Bahrain, and to contribute to the advancement of the Bahraini sports movement in general.

On this occasion, Ahmed Yusuf, CEO of Seef Properties, stated, “We are happy to be the platinum sponsors of Seef Properties First Ranked Padel Tournament, through which we are keen to enhance our contribution to corporate social responsibility in national initiatives in various sectors, especially in the sports sector.

This sector has always been a key element in the directives of the Kingdom’s Wise Leadership and the Respected Government to develop young people and push Bahraini youth further towards the forefront of sports tournaments of all categories.”