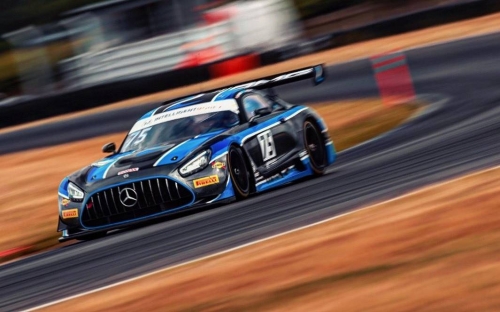 Bahraini-British motor racing team 2 Seas Motorsport climbed onto the podium yesterday in the Snetterton round of the Intelligent Money British GT Championship 2022, being held in the UK. The pairing of lady driver Flick Haigh and Jonny Adam, behind the wheel of 2 Seas’ #75 Mercedes-AMG GT3 car, took third overall in the day’s second of two races while also clinching second place in the Pro-Am class.

Meanwhile, teammates James Cottingham and Lewis Williamson in the team’s #4 MercedesAMG GT3 claimed a Pro-Am podium in the first race, after finishing third in class. The results wrapped up a strong showing for the team in Snetterton, which was one of just two meetings this British GT season to feature two races.

Then, disaster struck as a late puncture robbed them of a potential win as they eventually did not finish. Cottingham and Williamson were able to power to the chequered flag in fourth place overall, but they were also able to classify in third amongst the Pro-Am class runners.

They completed the 33-lap distance 13.033 seconds behind winners RAM Racing, featuring Ian Loggie and Callum Macleod, also driving a Mercedes AMGGT3. WPI Motorsport were the runners-up just 0.549s back while Team Abba Racing were third 11.864s off the winning pace.

Determined In the day’s second race, Flick and Adam were determined to make up for their earlier misfortunes and had a superb performance over 32 laps, finishing 22.463s behind RAM Racing’s John Ferguson and Ulysse De Pauw to finish on the overall podium in third. They had also claimed the runner-up spot amongst the Pro-Am competitors at the chequered flag.

Crossing the finish line ahead of them were Barwell Motorsport, 0.340s from the victors. 2 Seas’ other pairing of Cottingham and Williamson were seventh overall on the final classification. They were 50.763s behind first. A total of 30 GT3 and GT4 cars took part in yesterday’s races.

The season returns next month with the only round outside of the UK. Popular Belgian track Spa-Francorchamps will be hosting the next meeting on July 23 and 24.