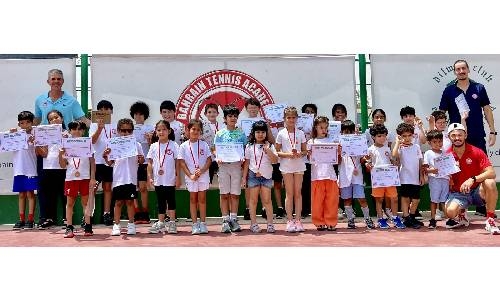 Bahrain Tennis Academy (BTA) held its 18th Annual Junior Awards Ceremony for 10-and-under players at the Dilmun Club in Saar. The ceremony was held to honour the most outstanding players of the 2021/22 season.

16 awards were presented across two sections: ‘Best of 2021/22’ (12 categories) and ‘Player of the Year’ (four age categories). Some of the categories included Best Forehand, Most Improved Player and Best Attitude.

Five players were short-listed for each award and then the winner chosen based on the criteria for each category while also taking into account each player’s level and experience in the game. Winners of the prestigious Player of the Year awards were Yousif Khonji (four-and-under), Aarush Shah (six-andunder), Emme Texmo (eightand under) and Sarah Bermas (10-and-under).

Other category winners were Dylan Barrie, Niall Darwish, Dhruvi Hemant, Ali Alaali, Andreas D’Souza and Ali Hadi Mubarak. Sarah Bermas was the star of the ceremony by being nominated in ten categories and claiming five awards. The awards were presented by BTA Director, Dan Barrie, who said, “We were thankful to have been able to complete our first full season in three years. The kids have really thrived by being able to get back to regular training.”