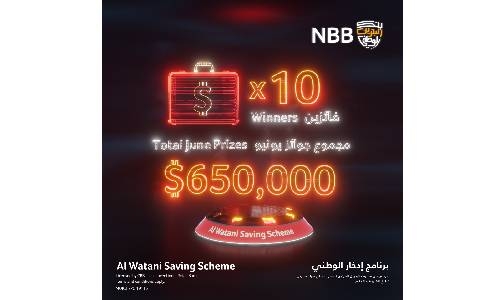 The National Bank of Bahrain (NBB) announced its upcoming semi-annual prize for Al Watani Saving Scheme for the year 2022, whereby a prize of USD 650,000 will be distributed over 10 lucky winners with a prize of USD 65,000 each at the draw set to take place on [7th of July].

In line with the bank’s celebration of its 65th anniversary, NBB offers a variety of prizes throughout the year and aims to reward the largest number of customers. Subah Abdullatif Al Zayani, Chief Executive Retail Banking, said: “We are thrilled to announce that following our first draw of the year, which awarded a total of 100 customers, we are gearing up to reward the second set of winners for the year 2022.

As NBB celebrates its 65th anniversary, we are looking forward to enhancing our celebrations by aligning our prizes with the theme of the 65th anniversary.” NBB customers can deposit into their non-certificate-based accounts and benefit from Al Watani’s all-year-round prizes along with having their interest payments paid out for their savings in the Express Savers and SaveWave accounts.