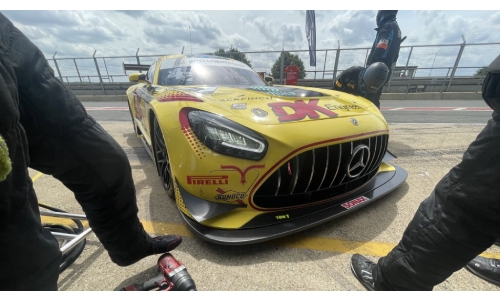 2 Seas Motorsport claimed front row grid positions for both of today’s races in the Snetterton round of the Intelligent Money British GT Championship, taking place in the UK.

The Bahraini-British motor racing team showed impressive pace in their two cars in qualifying yesterday, both of which came agonisingly close to clinching pole for each race. In the first qualifying session, the duo of Flick Haigh and Jonny Adam in 2 Seas’ #75 Mercedes-AMG GT3 claimed the leading grid position for the team, qualifying second behind double pole-sitters RAM Racing.

Flick and Adam were just 0.048 seconds off the leading pace but still have a good starting position for today’s opening race of the weekend, which is scheduled for a 12.45 pm start, Bahrain time. 2 Seas teammates James Cottingham and Lewis Williamson also had an impressive qualifying, taking third place on the grid right behind RAM Racing’s pole men Ian Loggie and Callum Macleod.

They set the fastest lap that was just 0.113s behind RAM Racing’s John Ferguson and Ulysse De Pauw. 2 Seas Teammates Flick and Adam were this time in fourth place on the timesheet and will start on the second row. They qualified 0.549s behind the leading pair. A total of 17 GT3 cars are set to battle it out in Snetterton for the next two races in the British GT season.