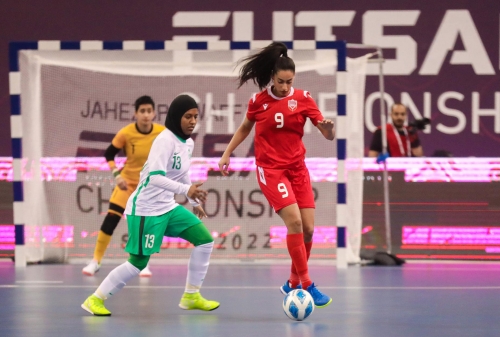 The Bahrainis put in a brave fight in a heartbreaking 0-1 defeat to hosts Saudi Arabia in their semi-final clash that went into extra time. Regulation ended deadlocked at 0-0, but then the Saudis were able to score in the first additional five-minute period.

Al Bandari Saud supplied the decisive strike for the home team, who were given everything they could handle by the battling Bahrainis. Both sides had plenty of chances to score in the game, but both were also strong defensively.

With the result, Bahrain are now left to play for the tournament’s bronze medals. They will face off with the losers of the other semi-final match between Kuwait and Iraq. The bronze medal contest is scheduled to be held tomorrow at 6pm, to be followed by the gold medal match at 8.30pm.

All games are being held at King Abdullah Sports City. After regular time ended goalless, the contest headed into two extra-time periods of five minutes apiece. Both teams pressed hard for the opening goal and it was the Saudis who were able to make the most of their opportunity.

The hosts broke the deadlock with two-and-a-half minutes left in the first additional session. Bahrain had just threatened on the Saudi end of the court, and then after successfully gaining possession, Saudi captain Leen Mohammed led a brilliant counterattack in which she was able to evade the defence of Bahrain’s Shaikha Alanood bint Hamad Al Khalifa.

That led to a two-on-one with Saud against Bahrain skipper Yasmeen Tobellah, and Mohammed sent a fine low cross to her charging teammate across the face of goal. Her pass was precisely on the mark for Saud to tap the ball home between the legs of Bahrain’s rocksteady goalkeeper Zahra Ali along with the sliding challenge of Shaikha Alanood, who did well to sprint back.

It was the first goal Bahrain conceded in the entire tournament. The nationals tried to find an equaliser over the remainder of the game and came close multiple times. Shaikha Alanood had an effort from close range blocked by Saudi goalkeeper Sara Al Dossary, who also parried away shots from Bahrain’s Yasmeen and Manar Yaqoob. Manar had the nationals’ last chance of the night with 30 seconds to go, but her shot went just inches wide of the right post.