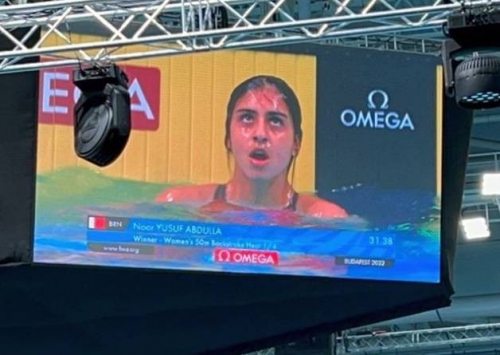 Bahraini swimmer Noor Taha yesterday won her women’s 50 metres backstroke heat at the 19th FINA World Championships 2022 in Budapest, Hungary. Noor was one of nine competitors in the opening race of four in the first round of the event.

The 16-year-old Bahraini showed her limitless potential by winning her heat in 31.38 seconds. She had a reaction time of 0.60s.

Noor completed the race 0.57s ahead of runner-up Ariuntamir Enkh-Amgalan of Mongolia, while Lucia Ruchti of Kenya came third 0.95s off Noor’s winning pace. Despite her strong showing, Noor was unable to advance to the semi-final round.

Only 16 swimmers from all the heats made it through. Kylie Masse from Canada was the top qualifier in 27.26s, while Paulina Peda of Poland was the last to advance in 28.47s. Noor’s result marked her second successive victory at the worlds, although she did not advance both times. She previously also won her women’s 100m backstroke heat.