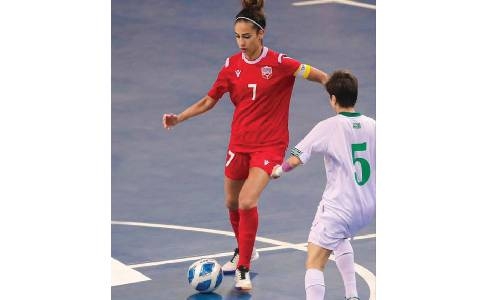 Bahrain’s women’s national futsal team take on their counterparts from Saudi Arabia tonight in the semi-finals of the third West Asian Futsal Federation (WAFF) Women’s Futsal Championship 2022, taking place in Jahez, Saudi Arabia. The nationals qualified for the last four after winning both their games in Group A of the preliminary round.

They first thrashed Palestine 6-0 before edging past a battling Iraq 1-0. That earned them the full six points in their division table. The Bahrainis made it through to the semis alongside the Iraqis, who are set to take on Group B winners Kuwait in the other contest.

Bahrain’s match with hosts Saudi is scheduled for a 6pm kick-off this evening. It will be followed by the Iraq and Kuwait clash starting at 8.30pm.

The winners will move on to the gold medal contest, which is scheduled to be held on Friday kicking off at 8.30pm. The bronze medal game will take place the same evening as the early match at 6pm.

Hessa is currently the joint-leading scorer of the competition with three goals, along with Kuwait’s Shrouq Basha. Shaikha Alanood is right behind them on the top scorers list with two goals, alongside Kuwaitis Reem Almulla and Abeer Alrefaie. Meanwhile, national team goalkeeper Zahra Ali is also recognised for her brilliant showing between the posts to date.

Bahrain are the only team in the tournament with a clean sheet so far. The Bahrainis are competing in the WAFF event fresh from winning the gold medal at the women’s futsal competition at the third GCC Games in Kuwait, which took place in late May.

They had been training daily under the supervision of head coach Lino Gomes, who is from Brazil, and their coaching staff. Heading into the tournament, the Bahrainis will be aiming for gold to add to their silver medals won in 2019.