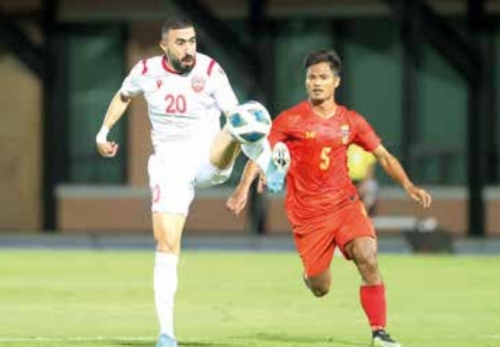 Bahrain’s senior men’s national football team scored a late 2-0 victory over their counterparts from Myanmar last night in an international friendly match played in Bangkok. Two quick goals from Mahdi Abduljabbar and Mahdi Humaidan, scored within a two-minute span in second-half stoppage time, spelled the difference between the two sides.

Abduljabbar was first to find the net from the penalty spot in the 91st minute. He was earlier brought down in the box by the Myanmar goalkeeper as he was about to receive a fine through-pass. After picking himself up, Abduljabbar stepped forward to take the penalty, and the Bahrain league’s top scorer made no mistake with his effort, which he sent to the bottom-left corner of the net.

Then, just a few moments after the re-start, Bahrain was able to regain possession and Humaidan received the ball on the left flank. He then made his move towards the goal and fired in from an acute angle, which virtually sealed the win.

Yesterday’s friendly was part of the national team’s ongoing overseas training camp in the Thailand capital. They are scheduled to remain there until Tuesday, which is when they will play another international friendly against the host Thais.

The national team is conducting their Bangkok camp in preparation for their AFC Asian Cup 2023 qualifiers, which will be held in Kuala Lumpur next month. Bahrain is in Group E of qualification, which includes hosts Malaysia, in addition to Bangladesh and Turkmenistan.