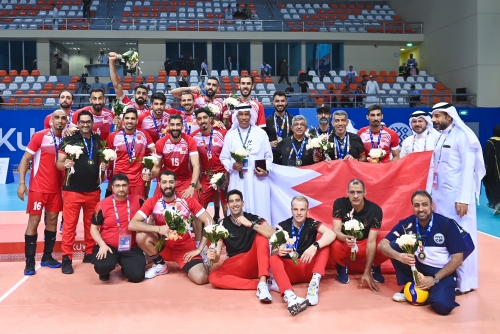 Bahrain captured the silver medals in men’s volleyball last night at the third GCC Games in Kuwait. The Bahrainis finished as overall runners-up following a hard-earned 3-2 (25-20, 27- 25, 22-25, 15-25, 15-13) victory against the host Kuwaitis in their final match of the competition, which was held in league format.

It was the fifth fixture for the nationals at the Games and they finished with four wins and just one loss, which earned them their silver medals. Qatar clinched gold while Oman won bronze.

The Bahrainis were the two-time defending champions heading into the GCC Games, but lost out their chance on an unprecedented “three-peat” after losing to the Qataris in their penultimate assignment.

The men’s volleyball team’s silver was Bahrain’s lone medal from the Games yesterday. They improved their overall tally to 56, which includes 20 gold medals, 21 silver and 15 bronze. The Bahrainis maintained their position in second place on the six-nation medal table.

Hosts Kuwait continue to lead, while behind Bahrain ranked third through sixth are the UAE, Qatar, Saudi Arabia and Oman. In last night’s concluding match of the men’s volleyball tournament, the Bahrainis got off to a hot start and took a commanding two-set lead following a double-block between Mohamed Aldwairi and Mohamed Yaqoob.

The nationals appeared to be cruising to an easy win, but the home team had some fight left in them and convincingly took the next two sets, sending the game into the tie-break. There, Bahrain took a 7-4 lead but the Kuwaitis scored the next three points to tie the proceedings and regain the momentum.

But the Bahrainis managed to pull away for an 11-9 advantage on a service ace by Ali Marhoon, and then later a Naser Anan spike put them on the verge of the win at 14-12. After Kuwait scored the next point, the home team eventually gifted the win to Bahrain with a service error to end the match, which lasted over two hours.

Yaqoob and Anan top scored for the Bahrainis with 15 points apiece, all of which came on offence. Ali Ebrahim added 12 for the nationals. Abbas Al Khabbaz and Aldwairi were impressive defensively at the net, finishing with four and two blocks, respectively.

Following the match, the medal-winning teams were awarded their respective accolades. Meanwhile, in the GCC Games’ tennis tournament, Bahrain bowed to hosts Kuwait 0-3 in their group clash last night in the men’s team event.

In the first match, Hasan Abdulreda lost to Kuwait’s Abdulhamid Mubarak 2-6, 0-6; and then Yusuf Qaed fell to Essa Qabazard 4-6, 2-6. The pairing of Youssef Ashraf and Jaber Abdula’al then suffered a 1-6, 2-6 defeat to Qabazard and Bader Antar to close out the affair.

The Bahrainis will look to bounce back today when they play Saudi Arabia in their next match, scheduled for a 4.30pm start, Bahrain time. In yesterday’s action in padel, both Bahrain’s men’s and women’s teams suffered losses in their respective competitions. In the men’s team event, the Bahrainis lost to Saudi Arabia 1-2.

Rashed Alobaidli and Khaled Althawadi went down fighting to Fahad Al Saad and Omar Al Thagib 3-6, 6-0, 3-6 in the first match. Bahrainis Ali Dawani and Husain Dawani then posted a 6-3, 6-0 win over Sattam Alshahrani and Abdulrahman Alazzam.

But then Abdulla Mohammed and Ali Alasfoor lost the decisive match to Musaeed Alazzam and Omar Abdo 6-7, 4-6. On the distaff, Bahrain lost 1-2 to Oman in the women’s team competition. Maryam Alammadi and Maryam Isa opened the head-to-head with a 1-6, 3-6 loss to Fatma Al Nabhani and Maryam Al Balushi.

Bahrainis Safa Safar and Esra Nuruddin then fell to Azza Al Hinai and Sarah Al Balushi 1-6, 2-6; before Sara Khonj and Fatima Jassim closed the contest with a 6-0, 6-0 win over Eathar Al Bulooshi and Quote Al Nabhani.