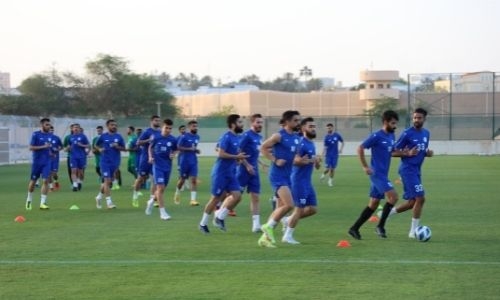 Bahrain champions Riffa leave for Kuwait City today to compete in their group stage matches of the AFC Cup 2022. The matches are scheduled to be held from Wednesday next week up until May 24. Riffa are in Group B of the competition alongside Shabab Al Khalil of Palestine, Dhofar of Oman and home side Al Arabi. Riffa’s travelling delegation includes the club’s CEO Mohammed Ahmed Al Janahi, head coach Ali Ashoor and his coaching and support staff.

There are 23 players on the team’s roster, to be spearheaded by top stars Mohammed Jassim Marhoon, Komail Alaswad, Jassim Al Shaikh, Redha Sayed Isa, Hazza Ali, Hamad Al Shamsan, Sayed Mahdi Baqer and Hashem Sayed Isa, to name a few. Riffa open their campaign on Wednesday against Arabi, before playing Dhofar on May 21.

They then complete the group stage with their match against Shabab Al Khalil on the 24th. Riffa need to finish atop their group or be the best runner-up from the West Asia Zone to advance to the next round of the competition. There are three groups in all in West Asia. Fellow-Bahraini side East Riffa are competing in Group C—the matches of which will take place in the Kingdom at the Muharraq Club Stadium in Arad.