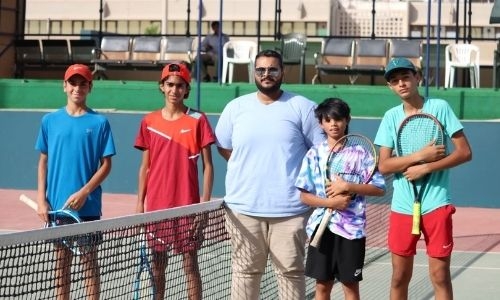 Mohammed Alawadhi and Abdulrahman Alabdullah from Kuwait captured the boys’ doubles title in the International Tennis Federation (ITF) 14 and Under Development Championships for West and Central Asia, hosted by the Bahrain Tennis Federation (BTF) last week.

Alawadhi and Alabdullah clinched the title after defeating Bahrainis Hashim Altoobli and Ahmed Ibrahim 6-4, 5-7 [10-4] in a tightly contested final, played at the BTF courts in Isa Town. The result earned Alawadhi a double for the tournament, after he had also claimed the boys’ singles crown.

The boys’ doubles final marked the end of the ITF tournament, after which the top two competing national teams were promoted to the ITF 14 and Under Development Championships for West and Central Asia Finals in 2023, while the top two players amongst the boys and girls joined a side project known as the ITF Touring Team that will be going to the finals this year.

Last week’s event was the first of two ITF competitions in Bahrain. The second event will commence today for another four days of action at the BTF courts in Isa Town.

Russia-Ukraine crisis: No one can predict length of war, says Zelensky