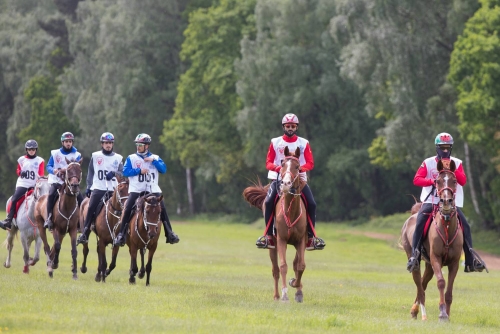 Under the leadership of HH Shaikh Nasser bin Hamad Al Khalifa, Representative of HM the King for Humanitarian Works and Youth Affairs, the Royal Endurance team has entered the final stages of its preparations for the Windsor Equestrian Championship which will feature a broad list of international elite riders who will gather in the suburbs of London to vie in the prestigious contest.

HH Shaikh Nasser bin Hamad Al Khalifa will spearhead the team in the 160km race, while he will be on the team side during the 120km public race and the 120km juniors’ race as well as the 100km contest to provide the Bahraini participants valuable tips.

Commenting on this, Dr Khalid Ahmed Hassan, Manager of the Royal Endurance team, underlined the significance of HH Shaikh Nasser bin Hamad Al Khalifa’s leadership for the Bahraini squad, highlighting His Highness’ unique abilities and capabilities as a key driver for the team to compete for top honours.

He pointed out His Highness’ leading role in upgrading the skills and capacities of the Bahraini jockeys. He also indicated that Bahrain’s participation in this distinguished championship will be vital to confirm the Kingdom’s high position in this important sport thanks to the interest and support of HH Shaikh Nasser bin Hamad Al Khalifa, whose plans and programmes have contributed to the elevation of the endurance sport and taking it to new heights.

He further explained that the Royal Endurance team, under the leadership of HH Shaikh Nasser bin Hamad Al Khalifa who is the captain of the team will be eying top places. Meanwhile, the veterinary examination for the championship will take place on Thursday. It will coincide with the jockeys’ weigh-in process.